New Orleans        As a post-turkey break and some relief from being a witness to the LSU-Arkansas game, watched in the midst of all of our Arkansas family, the son and I snuck off to the movies to see No Country for Old Men made by the Coen brothers (Fargo fame) based on the book by Cormac McCarthy.  I don’t read much fiction these days — no time — but I’ve read, and liked, McCarthy and his dark visions of the West, especially along the US-Mexico border from his El Paso perch.  I was also curious about the country where this sparse, violent movie was set and what it would look like in a movie.

We’ve camped along the border, particularly the Big Bend area as well as the stretch between the Rio Grande and El Paso.  Orell Fitzsimmons and I has also driven this country frequently during the years we drove “fence mending” tours every winter meeting with members, staff, and assessing potential organizing targets on the southern boundaries of Local 100’s jurisdiction.

The movie is set in places like Eagle Pass, Del Rio, and El Paso in a series of cheap motels and hotels, as well as across the way in places reminiscent of Cuidad Acuna.  The frames of the landscape are rugged, spare, and feel authentic.  The locals in the movie also seem very, well, local, and though scarier than Fargo provide the same jolt of plain, simple humor basic to the area.  The timeframe is supposed to be the early 1980’s and that also aligns with time we had all spent there.

It says almost nothing to say that the country — to me — at least looked beautiful in its own eccentric and special way.

The bigger surprise is that somehow they made places like Eagle Pass and Del Rio look so much better than they really looked in 1982!  I can remember going through Eagle Pass in the mid-70’s taking a couple of days and camping along the border from Brownsville to nearly Big Bend and camping with my dog of the time, J.P. (Justice of the Peace to commemorate a huge victory in an ACORN campaign).  The county is one of the poorest in the US.  I can remember parking and walking into a combination community center, head start, and adult day care center being run by the local community action agency and talking to the workers there about the town and the area.  I ate for almost nothing at a cafe down the street.  There was almost nothing in the town then but a two lane highway that slowed down long enough to give you a ticket and hustle you out of town.

Hollywood can’t help itself it seems.  Even when they try to film a hard, dusty country, it still looks better than you know it to be once you scrub up for the filming and shine and gloss of celluloid.  This is hard, unforgiving country for men, women, children, dogs, and about everything but antelope.  Old men are the lucky ones that lived that long!  If it seems exotic as you watch the film, don’t buy the property over the internet.  Many of us have been there, and would advise you to stand in the dust and wind running down from the high plains for a couple of weeks before you put down either dollars or pesos in Cormac-country.  This is country where you better to love to live and be alone, because there will never be a crowd along the border.  Not enough water and not enough people willing to wait for what might never come. 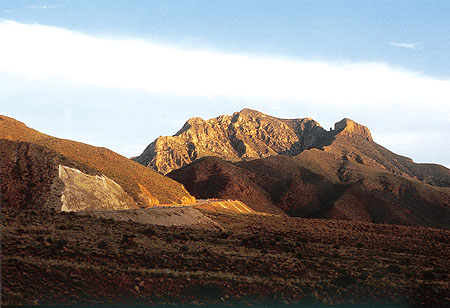