New Orleans     My household is not a huge fan of college football. My son represents in this area and watches the local teams with his grandfather pretty regularly. We don’t have a working TV downstairs so there is no tradition of watching football on Thanksgiving Day in the way that I can remember from my boyhood when we would visit relatives on my mother’s side in the Mississippi Delta and sit around the television in the afternoon in a satiated state of sluggishness and napping through one game after another, while intermittently going out to rake leaves or toss the ball back and forth. Because LSU and Arkansas have begun playing regularly the day after Thanksgiving since Arkansas joined the Southern Educational Conference (SEC), some of the family has begun to take this particular game more seriously than any other on the college scene.

A number of us drifted into the living room returning from the office on Friday and ended up trapped in the excitement of a well-played game that was finally won by Arkansas in the 3rd overtime after LSU failed to win on a gutsy, two-point conversion effort, and then fell from its perch as #1 in the country 50-48. Mi companera was unhappy from the end of the game onward though. Many of us had heard about this new “overtime” thing (LSU had lost in a 3rd overtime already this season to Kentucky for its only pre-Arkanese record blemish!) but were not well versed in it, and I have to admit, it was my first personal observation so I was mystified. For mi companera her disgust was philosophical. She did not understand what had happened to what she called the “integrity of the tie.” Having been brainwashed by years of sports page reading, I didn’t get the issue at first, and it only sunk in later that in fact she had a point. What was wrong with a tie? This was college football after all, rather than the pros. For years the writers and poll voters had been able to sort out winners and losers in college football even with a tie, and now with the BCS playoffs, even a tie might be decided eventually at this level of the amateur football stratosphere. What in fact had happened to the integrity of the tie?

The question permeated more deeply aided by a late Saturday matinee showing of Gone Baby Gone, starring Casey Affleck and written and directed by his brother, Ben Affleck, and set in the working class areas of Southie (South Boston) and Chelsea. Without spilling my guts about the whole movie let me say that there is a moral dilemma involved that is hardwired into class conditioning. Is someone better off raised by blood or money? Interesting question that is only easy to resolve if one has spent a career with a bias in a particular direction, but is also a little like deciding life or death by a coin toss in the way of No Country for Old Men. These questions though are in fact life and death, so sometimes one wishes for “the integrity of a tie” even when deep down you know there can’t be one in real life.

But in games why can’t there be ties? Ties appropriately salute the evenly matched, the well-played draw, and even, though perhaps it sounds trite, the value of sportsmanship, if indeed there are any left who believe in sportsmanship. Ties are an exercise in a different kind of character building that still has inherent value, and after all, just as LSU’s Coach Miles could call for a gambling 2-point conversion, every coach has a choice in concrete terms that allows any with such a proclivity for chance or a depth of conviction and character to avoid a tie, just as he did when he called for the conversion.

Perhaps this sounds a little too politically correct, like handing out trophies to all participants, but what game is this really that plays four quarters and then goes into some kind of scoring Russian roulette where now we have the football equivalent of soccer’s penalty kick where each team tries to bull it over from the 25 yard line. What level of unreality is that? What game is this?

What happened to the integrity of the tie? 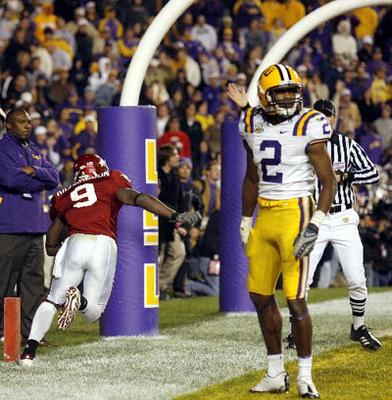 LSU receiver Demetrius Byrd, right, looks for a flag as Arkansas cornerback Matterral Richardson (9) runs away with the interception that won the game, 50-48, over LSU.