San Francisco      Gary Delgado was the first organizer I ever hired at ACORN about a million years ago. He worked in Little Rock for a while as a fish out of water for a year or more. I managed to get him back in 1978 or so to staff the effort to create the ACORN Peoples’ Platform. By then he had a doctorate and turned his thesis into one of the few books that exist about ACORN. He went on to found and direct first the Center for Third World Organizing (CTWO) and then more recently ARC — the Applied Research Center — both of which were based in Oakland. Interestingly, he pulled up his line and left ARC a little more than a year ago. I cajoled him into joining us as part of the Organizers’ Forum delegation to Turkey last year, so we got to visit and catch up, but I had not really seen him since then. In Gary’s usual style a couple of months ago I got a call out of the blue indicating that he wanted to talk to me next time I was in the Bay Area so we caucused at the Ferry Building so I could see what he had on his mind, which usually meant he had some thoughts on what I should do!

He had been spending his time in interesting fashion. He had taught some courses and did some training. He was reading a lot, mostly fiction he said. Asking why, he gave a great answer and simply replied: “Infinite possibilities.” By this Gary meant that he enjoyed reading (and thinking!) about something unconstrained by the limits of reality, which is a classic way of making the point. He had also been taking courses in filmmaking, and there was the central point of his lobbying me on this fine day along the Bay.

Gary believed we needed to take propaganda more seriously at ACORN and get on the stick and do more of it and do it thoughtfully. He also was taken with the power of film as a “next generation” communications tool which our current (and especially our older) organizers are not utilizing. We watched an excellent piece that was 18 minutes long called “Racing California” that he had finished recently that made the point well. He thought we needed even shorter pieces, though he also felt that we needed a longer piece, a real ACORN movie. I laughed at that! Gary, who had written what had evolved to become “the” ACORN book, now was clearly ready to think about also having a hand in “the” ACORN movie!

Thinking about propaganda, Gary argued that the problem was not the tools. There were lots of people comfortable with film and much of the new technology that is evolving for communication. The problem was really in the area of propaganda and determining not simply the “message” but how to implement the message into a program. He told a funny-sad story of some of his young film student habitues from his class who would spend days and days coming up with a concise message and believe that the job was then done and miss completely the point and problem that it needed to tie into something that then made it real.

Gary was advocating that we would be making a mistake in separating the communication tools from organizers and the organizing process, just like the film students were doing. We needed to both embrace our obligations to “educate” and move people through propaganda that was not simply speaking truth to power, but persuaded and did so with the power to provoke and provide action. We needed to grab those new tools and put them in hands that knew how to space them.

We talked for a time more about a range of other suggestions and possibilities for the work and for ACORN until Gary needed to run to the unemployment office to keep current, and I needed to run for my next meeting, but both of us left with a lot to think about until the next time we get together or Gary decides that there is something else that I need to understand and make a priority! 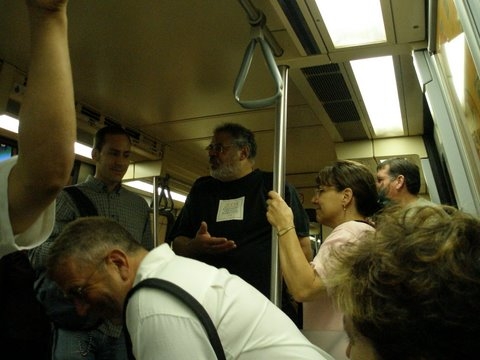