New Orleans     The headline on this story would be the meeting between Senator Barack Obama from Illinois and President Maude Hurd and the ACORN Executive Board along with some other leaders in the region in New York City last week to finally get the Senator on record with his answers to the questions that ACORN has been posing to all of the candidates for President over the last five months. The meeting went well. Senator Obama was introduced by former ACORN Regional Representative (and now Chicago Alderwoman) Toni Foulkes. The interview was on film and ACORN leaders and members will be able to come to their own conclusions once the DVD is finished that allows a comparison in the questions and answers to all candidates.

The backstory on this is great though and a pleasure to share.

ACORN had been trying for months to calendar Obama. We invited him to speak in DC when we interviewed Edwards and Richardson. We invited him to Philadelphia this summer where we interviewed Clinton, Kucinich, and Edwards again before more than 1000 members. The schedule for the Senator kept eluding us. ACORN Political Director Zach Polett had visited the Obama campaign directly in Chicago, met and talked to their political director and campaign directors, and made clear both our openness and our interest. Our powerful Illinois organization had reached out for the Senator as had our sister organization, SEIU Local 880, but for one reason or another or for whatever reason we could not nail the meeting.

It took Jesse Kest to make this meeting happen!

Jesse is a college sophomore and the daughter of ACORN veteran Jon Kest and Fran Streich (now with UFT). It turned out that Jesse, in the midst of transferring from the University of Pennsylvania to Columbia this fall, ended up with some non-school time, so being an independent woman of the world starting working for the Obama campaign in their New York City office. She was not exactly in the cat-bird seat there, but she was near enough to be in the know.

She heard that Obama was planning to come to New York City for various business from raising money to meeting with the Mayor as it turned out. Having overheard at home that ACORN’s leaders were having trouble getting a meeting with the Senator finally put together, she saw the opportunity and seized it, raising the point with the NY campaign manager for the campaign that if Obama had any time, this would be a great opportunity to meet with ACORN leaders. Well, why not?

This started the ball moving. Her dad followed up. Zach got in the loop. Jesse kept the issue alive and sure enough this week the meeting in fact happened and came off without a hitch!

Jesse re-teaches us all a simple organizing lesson. It’s not just a matter of being at the right place at the right time. It really is knowing to seize that time!

Jesse, atta-girl, hats off, big whoops, and thanks again for everything! 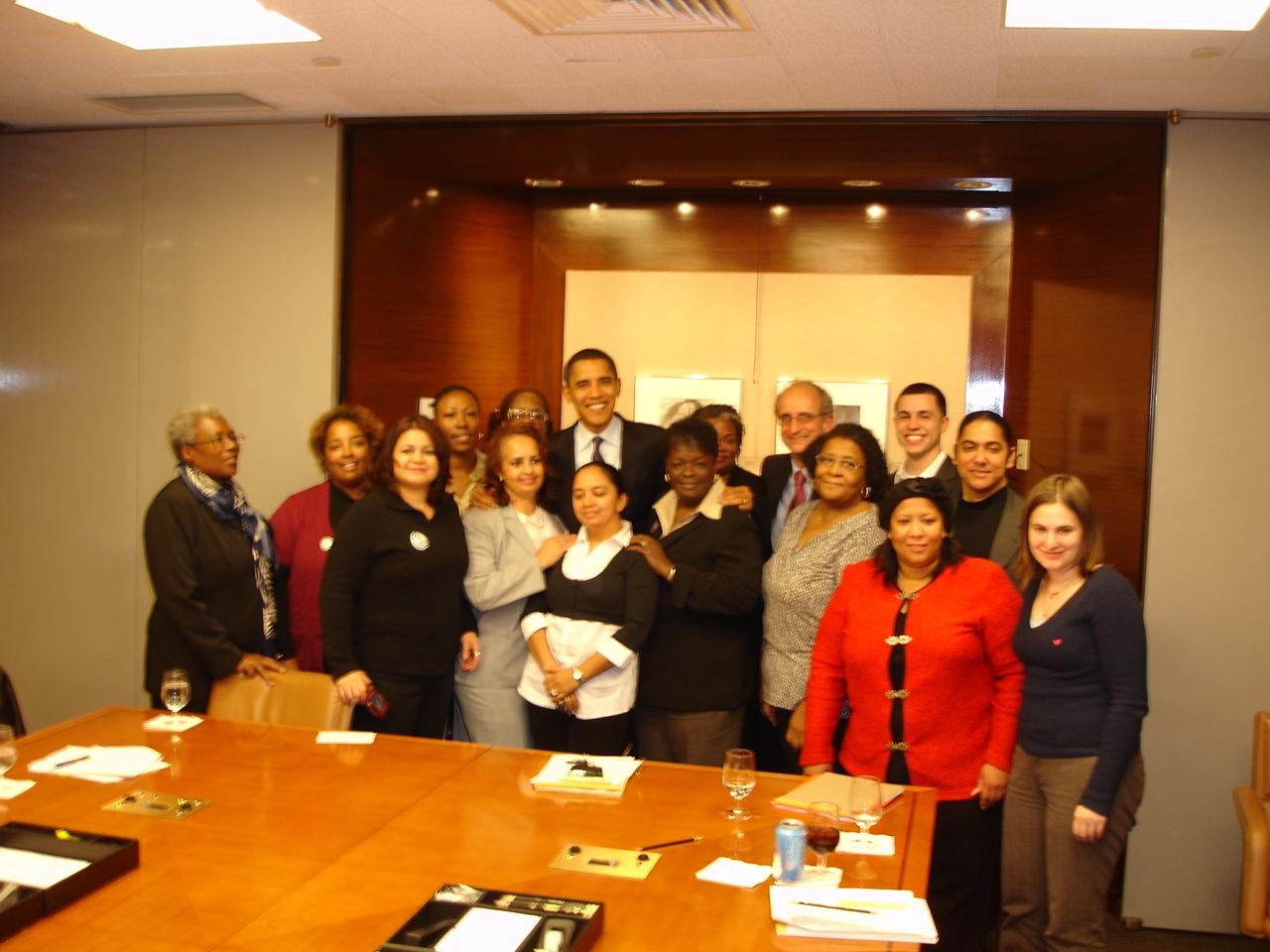 Senator Obama, the ACORN board members, ACORN staff, and Jesse (first row to the right in the black and brown)