New Orleans     Erik Eckholm did a piece for the New York Times that we read carefully in light of the ACORN asset building program through our expanded ACORN Access Centers that are trying to achieve maximum eligible participation of lower income families. In many ways this is truly bizarre. There is $105 Billion owed in child support and almost half of this would be part of a clawback program that families would never see because it would be attached to repayment rather than supplementing income. It is no wonder that one of the drivers of family poverty is whether or not a family has only a single parent. The loss of income itself from two breadwinners can push the family below the line — and it seems let them be held there.

The hard question for policy makers, especially if we actually achieve a “kinder and gentler” regime change is whether or not this problem of short changing families and imprisoning them in poverty is an unintended consequence or exactly what was meant to happen in a punitive and unforgiving society. It is hard to imagine that the day is coming where we will be carrying placards that read, “Child Support is for Children!” and “Take Welfare Off Child Support!”

Eckholm’s article is below. You decide.

Sally Ryan for The New York Times
Against a doctor’s advice, Karla Hart, a mother of four, took a part-time job at a day care center in Milwaukee to help pay her bills.

MILWAUKEE — The collection of child support from absent fathers is failing to help many of the poorest families, in part because the government uses fathers’ payments largely to recoup welfare costs rather than passing on the money to mothers and children.

Close to half the states pass along none of collected child support to families on welfare, while most others pay only $50 a month to a custodial parent, usually the mother, even though the father may be paying hundreds of dollars each month.

Critics say using child support to repay welfare costs harms children instead of helping them, contradicting the national goal of strengthening families, and is a flaw in the generally lauded national campaign to increase collections.

Karla Hart, a struggling mother of four here, held out her monthly statement from the county child-support office.

Her share: $97.22. “That extra money was a bill I could pay,” said Ms. Hart, 56, who has lupus and other serious ailments but against her doctor’s advice has started working at a day care center, in a failing effort to achieve solvency.

Reflecting a growing, bipartisan sense that diverting child support money to government coffers is counterproductive, Congress, in the Deficit Reduction Act passed in early 2006, took a modest step toward change. Beginning in 2009, states will be permitted to pass along up to $100 for one child and $200 for two or more children, with the state and federal governments giving up a share of welfare repayments they have received in the past.

The Bush administration has set a goal of increasing the share of collections distributed to families and reducing the amount retained by the government. But the drive to reduce the budget deficit has gotten in the way. As part of last-minute budget crunching, the Republican-controlled Congress in that same act reduced by 20 percent the child-support enforcement money it gives to the states, starting this fall. Many states say the effort to force them to pay more of the enforcement costs will impede collections and prevent them from passing more money on to needy families.

“There was a real groundswell toward the idea of giving more of the money, or even all of it, to the families,” said Vicki Turetsky, an expert on child support at the Center for Law and Social Policy in Washington. But that momentum has been stopped short, she said, by the financing change.

Ms. Hart was luckier than most mothers in her position because for more than eight years, under a federally approved experiment, Wisconsin gave all money collected from noncustodial parents to the families. When the experiment ended last year, she lost most of the check.

“My daughter told me this morning that she needed $9 for something at school, and I was like, ‘But I have to pay the rent,'” Ms. Hart said. “I gave it to her, and now I have to find that money someplace else.”

Barry A. Miller, the chief of the North Carolina child support office, said North Carolina, like about half of all states, passed no support money on to families. “We were seriously considering a change, but it’s doubtful we could do that now,” said Mr. Miller, who is also the president of the National Council of Child Support Directors. In North Carolina and elsewhere, lost federal aid may instead force cuts in personnel and enforcement.

On Nov. 15, 24 governors from both parties sent a letter to Congress asking it to repeal the cuts, arguing that they would hurt one of the government’s most cost-effective programs, which raises more than $4 in child support for every $1 spent on enforcement.

The intensified national effort over the last decade to establish paternity for babies born out of wedlock and to collect more support money, mainly from fathers, is often described as a great success. And indeed, collections have increased significantly, to some $24 billion in 2006 from $12 billion in 1996, helping many families avoid penury.

But for the poorest men and women, the story is mixed. Young fathers with little education or job prospects find themselves in arrears and facing jail time or the loss of their driver’s licenses as a result, making it all the harder to start earning and paying, said David J. Pate Jr., an assistant professor of social work at the University of Wisconsin, Milwaukee.

One startling indicator of how pervasively the poor are affected is highlighted by Daniel L. Hatcher, a legal expert on welfare issues at the University of Baltimore School of Law, in a forthcoming law review article. Of the nation’s total uncollected child-support arrears of $105 billion in 2006, Professor Hatcher writes, fully half was owed to the federal and state governments to recover welfare costs, rather than to families.

When Congress set up the current child support system in the 1970s, recovering welfare costs was an explicit goal, with some experts arguing that it was only fair for fathers to repay the government for sustaining their offspring and that giving families the money was a form of “double dipping.” But experience and research have suggested to most experts and state and federal officials from both parties that the policy is counterproductive — driving fathers into the underground economy and leaving families more dependent on aid.

Today, said Ron Haskins, a Republican expert at the Brookings Institution, “I don’t think anyone thinks it’s double dipping, especially because one of the major goals is to get more money to the mother so she can stay off welfare.”

The major obstacle to change, Mr. Haskins said, “has usually been that it cost both the federal government and the states money.”

Studies of the Wisconsin experiment showed that when support payments were fully passed along to mothers, more fathers came forward and paid more of the support they owed, said Maria Cancian, director of the Institute for Research on Poverty at the University of Wisconsin, Madison. As families receive more support money, they are less apt to require public assistance, she and other experts say, making up for any short-term loss of revenues. And fathers are more likely to establish lasting patterns of payment and connection with their children, Ms. Cancian said.

Tonya Wenk, 24, of Milwaukee is so angry at the reduction in payments for her daughter that she and the father have applied to withdraw from the child support system. Ms. Wenk said the father, Lashun Gray, had always paid his required sum to the state and more in private.

Mr. Gray, 26, a forklift driver at a large store, said of the disappearing money, “It bothers me a lot.”

The federal government refused to extend the waiver that allowed Wisconsin to pay all money to families, but the state, despite a $27 million cut in federal aid, continues to forgive its own share of welfare costs.

That is why Ms. Hart, like others in Wisconsin, is receiving more than she would in other states. But this is small comfort to the ailing mother, who had to move to Milwaukee’s outskirts when the building where she rented an apartment was lost to foreclosure, must share a bed with a daughter and worries that she cannot buy a computer for her children in high school.

“The school says go to a library to use one, but we don’t have any transport to the library,” said Ms. Hart, who cannot even think of owning a car.

Going to work, she said, may have been a wash financially because her federal disability check and food stamps were reduced, as is her energy. 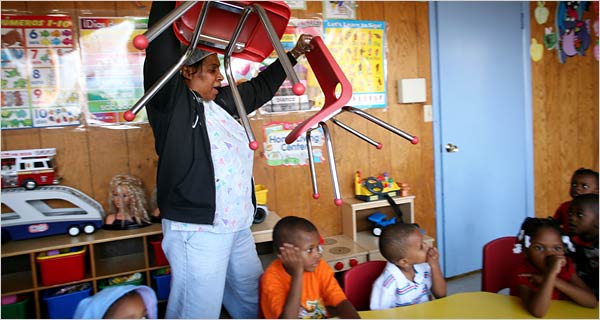 NY Times caption: Against a doctor’s advice, Karla Hart, a mother of four, took a part-time job at a day care center in Milwaukee to help pay her bills.