Lisbon     Here is an unusual tactic uncovered in my holiday reading from Chapter 4 of Hagen Koo’s book, Korean Workers: The Culture and Politics of Class Formation, on pages 80-81.

“On the third day, July 25, Dongil workers staged an extremely surprising and dramatic form of resistance, probably unique in world labor history. That afternoon, a few hundred riot police were brought into the factory. [Dongil is textile factory that the largely female workforce had occupied for two days.] The appearance of these policemen in dark blue uniforms and with full equipped combat gear was frightening. Some women cried out in fear. As the combat police began to approach the workers, the striking women began to undress and stood half-naked in front of the armed police. Later, workers reported that they took this action at the suggestion of a worker who had whispered in a panicky moment, ‘Men cannot touch undressed women, even if they are police.’ Some 500-800 naked women held each other tightly and sang union songs, surrounded by stunned police and male workers. One Worker, Suk Jung-nam later described the scene beautifully, ‘In the face of such an enormous threat of violence, it was our ultimate resistance, an action spontaneously taken, with no shame or fear. Under siege by the armed police and male workers, we hung tightly together in our nakedness. Can steel be stronger and harder than this? Who dares to touch these people? That was like one huge rock. It was like a time bomb ready to explode at the slightest touch.” Faced with this incredible scene, the police were momentarily dumbfounded, but not for long. They moved in and began to break up the protesters, hitting the women with bats, pulling screaming women by their hair, throwing them onto the ground, and dumping them into police vans. While battling the police, many women were completely exposed, but, as they wrote later, they felt no shame, but had only resentful tears, anger, and strong feelings of comradeship. The police arrested seventy-two women, but two hundred other women tried to block the cars with their naked bodies and some followed the cars on foot to the police station. Several women were hospitalized with severe bruises, and two women later developed mental disorders.

“The enormous sacrifice by these workers did not bring immediate victory, but it at least prevented the co-opted male workers from taking over the union.”

There was no happy ending here and in fact in seems that in a fight of several years in duration the women leadership of this union local were pushed out by their national union. But, it is impossible not to share a story of such power, courage, and innovation. 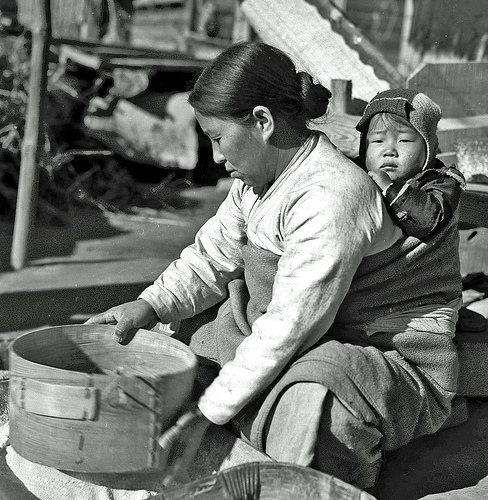