New Orleans        Sometimes politics is not simply money and engineering, and in fact represents a movement of people that expresses itself in surprising and dramatic fashion.  It is those times when we have to most carefully stop, look, and listen, and make sure we hear the train’s whistle clearly and either get on board or get off the tracks!

The dramatic results in the Iowa caucuses may be one of these historic and magic moments.  I say this not simply because of the results putting Obama in first place by a wide margin with 38% of the participants followed by Edwards with 30% and Clinton with 29%.  These results were no toss-up.  This was a solid thumping and ass whipping administered with grace and style.  No, I say this because the turnout itself had the feel of a real movement.  The numbers of participants in the 2004 Iowa caucuses were about 125,000.  Last night the numbers almost doubled!  235,000+ came out in the cold overwhelming the process, standing in line to get in the door and be counted, and then lining up for Obama.  Mobilizing new participants who had not been involved in past caucuses was a core part of Obama’s strategy, and clearly it worked big time.

The Obama message of change has also suddenly dominated the political space and changed the debate.  People responded deeply to the message of magic.  Edwards picked up his game for the 2nd place finish by a nose as a candidate of change as well.  Obama was candy to young voters and voters under 45 years old.  Clinton’s appeal dominated those over 60 without the taste or teeth for change it appears.

Obama made history as well on the issue of race that has been a Grand Canyon divide in this country.  Iowa is so white that you almost need special glasses to pick the people out from the snow banks.  If Obama can make white-white people like that ignore race and embrace hope and change, this guy is more than the real deal, he is someone who in fact is a candidate of destiny, and he will be president.

Whatever happens next, Obama clearly has once again turned the political world upside down.  He may not win, but it would be hard to bet against him with a gale wind behind his back from the Midwest going into New Hampshire.

The ACORN Executive Board is on its way into New Orleans today to meet on Saturday as they do annually.  The full board is on a call in the middle of the afternoon to assess the presidential race and the candidates and decide whether anyone measure up to ACORN’s needs and demands.  Suddenly, this call has become much more interesting and important. 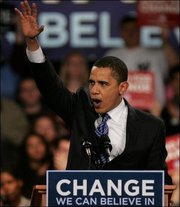