New Orleans        John Edwards not only said and talked more about class, equity, and the continuing struggle against poverty, but he also was a class act in every way.  When his people reached out and said that he was going to be speaking in the upper 9th Ward about poverty, New Orleans ACORN members wanted to attend not because he was running for President, but because Edwards continued to be one of the most consistent voices in the national arena that still drew the line between the dots of Katrina, poverty, and race.  I walked into the Elysian Fields office the night before Edwards’s speech and saw some of the members making signs that said, “Don’t Forget Us!”

As it turned out, Edwards was bookending his campaign, and was ending it where he had started it in New Orleans.  Many of our leaders and staff had been there at the beginning and were there at the end.  Zach Polett, ACORN’s National Political Director, was in town for another meeting and managed to go straight from the airport to the upper 9 to be there and say hello and thanks along with Steve Bradberry, head organizer of Louisiana ACORN, and many others.  I was disappointed that I could not leave my meeting and be there as well.

Why?  Simple, really.  Edwards has been a friend and comrade.  The races had not gone his way, but win or lose, he was a man that had fought along side of ACORN on Katrina and living wages, and we simply don’t forget friends and want to be there for them, whenever we can.

Edwards knows how to make his points powerful by what he does and not just what he says.  After his remarks he and his family worked on helping rebuild a house.

Last night near 8pm the debate was still on between Obama and Clinton.  Flipping channels, I got to see Edwards in the stands at the basketball game between UNC and Boston College and listened to Edwards being interviewed.  Five minutes later there was another picture of Edwards clapping in the stands.

I liked that.  This is a working man.  He doesn’t need to disappear on an island and sulk for a month.  He works on a house.  He goes and whoops for the home team.  He sticks to his roots and his raising.

This is the kind of friend that ACORN stands with no matter what happens in a couple of elections or on the front pages.  I hope we find ourselves working with him side by side for many, many years to come! 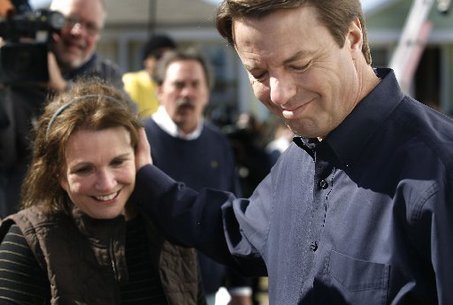 nola.com caption: Former presidential candidate John Edwards, right, clasps his wife, Elizabeth, after announcing he would no longer seek the nomination. He made his announcement Wednesday at the Musician’s Village in New Orleans.