New Orleans     This is a preview of coming attractions. In the next few weeks Social Policy, the quarterly magazine of opinion and information, will publish its first volume under its own imprint. This book is a collection of essays compiled by the long experienced organizer from Virginia and Kentucky, Joe Szakos and his wife, Kristin. The book is called Lessons from the Field: Organizing in Rural Communities.

We are excited to publish this book, since there are so few books about organizing in general and even fewer that look off the grid at the hard work being done by our brothers and sisters in building organizing in smaller communities and rural areas around America. There are key essays in the volume by Burt Lauderdale, now the long time director of Kentuckians for the Commonwealth, and another on the powerful organizing done in the Northern Plains by our long time friends at the Western Organization of Resource Councils (WORC), both of which are in the top ranks of efforts in rural organizing.

There is an essay that I contributed in the volume called the “Country Roads that Created ACORN,” that focuses on telling the seminal, but largely unknown story of the great Redfield Telephone Campaign in the rural areas between Pulaski and Jefferson Counties along the Arkansas River in central Arkansas in the late 1970’s. There are a lot of interesting lessons that instructed ACORN’s thinking about organizing, campaigns, representation, and the intersection between labor and community practice that emerge in the Redfield campaign, that made it fun to remember and reflect on all of these years later.

For organizers with an interest in work outside the city limits, this book is worth grabbing, and for ACORN organizers, leaders, and members interested in some of their own history this book will be an interesting read.

We are pricing the book to make it accessible to the hard working organizer community at about $10.00, as I remember, but Valerie Coffin, managing editor of Social Policy has the details and you can order a book now through her at mngeditor@acorn.org or via the Social Policy website.

We are proud to publish this first shot in the dark and hoping that if we hit some real interest that we can do more of this in the future! 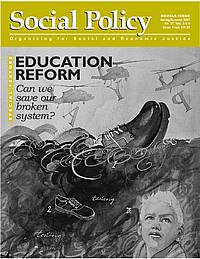