Yesterday the early CNN report showed a lead by Obama over Clinton until super delegates were counted, and then Clinton opened up a 90 delegate lead.  Today, 24 hours later it is even more confusing.  Now CNN says that Obama is leading.  Others are everywhere across the spectrum

The New York Times gives the note now to Clinton over Obama by 905 to 703, counting only delegates that have been “officially” selected and are “bound” by their preferences.

The Associated Press also says Clinton with 1045 to 960 in delegates, but this includes projections based on “non-binding” votes for candidate preference.

MSNBC says Obama by a thin hair over Clinton with a 4 delegate margin at 838 to 834 based on NBC News projections and unofficial returns.

The spinning in all of the papers is wild.

I can only advise that you vote if you have the opportunity, because betting at this point would be similar to just closing your eyes and throwing your money into the street! 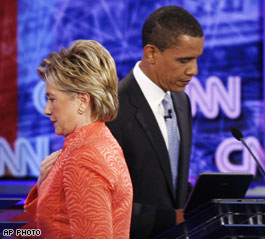