New Orleans        Senator Barak Obama became the only presidential candidate to actually make it to the state before Saturday’s primary.  He spoke at Tulane University, but in other ways this was classic campaigning as I read the Times-Picayune story.

First, he had a taste of Chicago transplanted to New Orleans:

Obama also focused on post-Katrina education needs in New Orleans, touring George Washington Carver Elementary School in the Upper 9th Ward. Walking through the cluster of temporary trailers behind a public school bus depot, he learned about the Recovery School District’s challenges from an old friend, Superintendent Paul Vallas, who once ran the schools in Obama’s hometown of Chicago.

"Superintendent Vallas tells me that, ironically, even though these are transitional buildings, in many ways they’re superior to the buildings that existed before the storm," Obama remarked as he paused in a makeshift gym — essentially a double-wide trailer with a large open floor space.

He spent more than 30 minutes there, asking teachers and administrators about their needs and taking questions from wide-eyed students.

The truth of course is that Superintendent Vallas had never been inside a New Orleans school until less than a year ago when he got the job, so welcome to “instant urban myth.”  Sure, let’s believe that double wide trailers are better than school buildings….exactly how?

But, then there was a good gulp of classic New Orleans courtesy of Leah Chase:

Before heading to Omaha, Neb., Obama stopped at Dooky Chase’s restaurant in Treme for a lunch of chicken, sausage and shrimp gumbo with the restaurant’s 85-year-old owner, Leah Chase.

"You’re too frail, baby. I have to fatten you up," Chase said to the lean Obama.

Chase, who is struggling to get her iconic restaurant back to full strength after Katrina, said she likes Obama, even though she’s always been close with President Bush. In explaining her change in allegiance, she summed up the message Obama hopes voters take to heart.

Of course a New Orleans cook wants to “fatten” Obama up!  And, of course when one king is dead, long live the king, and welcome to New Orleans, home of hospitality! 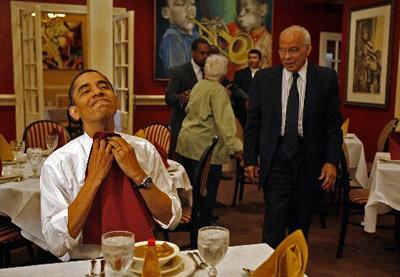 NOLA.com caption: Barack Obama tucks in a napkin in his shirt as he sits at Dookie Chase restaurant in New Orleans. Coming up to join him is Norman Francis, president of Xavier University. Chase said she was now supporting Obama.