Mexico City There were delegates and representatives there for this first ACORN International board meeting from the United States, Canada, Dominican Republic, Argentina, and our offices in both Tijuana and Mexico City, Mexico. Other delegates from Peru and Argentina were unable to make it when their visas were denied for travel to Mexico. It seems that the aduana authorities assume unless you are wealthy that you would only be coming to Mexico to jump ship for the United States. We will have to find a place to meet next year that requires no visas.

The burden fell on Ercilia Sahores, ACORN Latin America Director, to translate for the meeting since neither Maude Hurd from Boston or Sharon Shrieve from Toronto could speak Spanish and our other delegates did not speak English. The excitement that everyone brought to this first meeting translated into a level of empathy that surpassed the language issues.

The reports were detailed and extensive. The learning curve was quick. The northern delegates soon understood that a fight about water was literally a fight to not have to pay for water from a truck or haul buckets hundreds of yards to a standpipe, but to actually have running, potable water at hand and at home. A clean-up campaign was not a spring spruce up but a major mass action to deal with the fact that for reasons of bureaucracy and resources, many of our areas in Tijuana were fighting to get any sanitation services in near their residents and deal with the dump sites that quickly filled the open land that was not developed.

Our members in Latin America are not in the same home owners by and large at least in the sense of having title to their homes especially those in informal settlements so most of them are tenants in a larger sense. Sharon described some of the campaigns that tenants in Toronto were waging and the plans of ACORN Canada to get landlords licensed, to have escrow accounts managed by the city to assure repairs, to have mandatory inspections to quality standards, and even as Ercilia translated the expression on many faces were similar to how one would imagine someone on Earth getting the measure of someone from another planet. Sharon was talking about something that was beyond imagination in the experience of members elsewhere.

What was the same everywhere though was the common discussion of putting together meetings and actions. There was animated discussion on the techniques and travails of dues collection. All the leaders were taking notes as Victor Mendez from Santo Domingo went through the system they had created with captains de calle (block captains!) and how many there were and how they handled turnout and dues collections and renewal. The US system of using bank drafts is not on the table at ACORN International. It is back to old school and the teachers are in places like Buenos Aires and Santo Domingo, rather than in New Orleans or Philadelphia.

ACORN International was off to a good start! 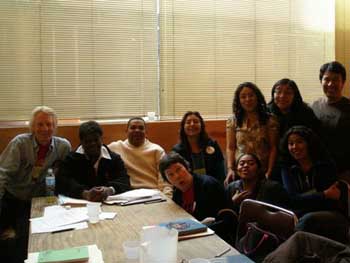 ACORN International board and staff in Mexico City
the board hard at work
Esther Melindez, delegate from Tijuana ACORN, shows some press on a victory there 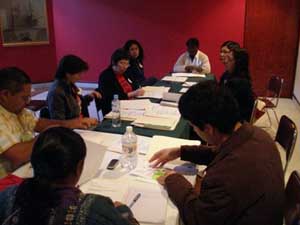 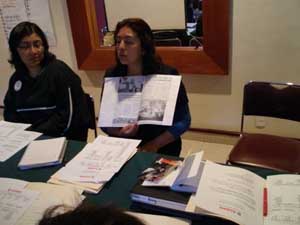