Mexico City Time does seem to fly. Looking at the program book over dinner, it did not seem possible that a little over ten years ago in October of 1997, a few of us accepted the invitation of Peter Cervantes-Gautschi to come to San Miguel de Allende in the highlands north of Mexico City and talk about whether or not an organization of constituency-based, membership organizations from both Mexico and the United States could provide mutual assistance in a way that redefined the nature of such interactions in a more collaborative and equitable manner.

The program book dated the period nicely, and the memories were largely good ones. There were pictures of our marching with the teachers on May Day when we met in Torreon. There was a shot of the back of my head in another meeting in Cuernavaca in 2000. Reading again about the first “convention” in Oaxtepec, I remembered going to breakfast and realizing that Maria Polanco, ACORN’s National Vice-President, had somehow stayed up with the youngsters and taught them how to dance until 4 AM in the morning. There was a photo of the organizing team that hit the doors in Ciudad Acuna in the state of Coahuila in 2000, where ACORN was represented by organizers Ginny Goldman and Clare Crawford both of whom were very young then, but have come to be pillars of ACORN’s operations. Ah, memories!

ACORN and SEIU Local 100 have been members over this decade through thick and thin. It turned out to be hard to find interests that were truly mutual because the mismatch of resources and capacity between organizations from either country was pronounced. Solidarity was built but perhaps still too much so from north to south than we would have hoped, though real barriers turned out to exist in terms of government restrictions on travel and access to visas. But it is still worth soldiering on, and we have built good partnerships with SEDEPAC and its leadership, especially Betty Robles in the north, and made valuable alliances with other organizations that have informed the development of ACORN Mexico as we move forward now.

Maude Hurd, President of ACORN’s board in the US, is here as well because we are using the opportunity and venue provided by Enlace to have our first board meeting this weekend of ACORN International with representatives from Mexico, USA, Canada, Dominican Republic, Argentina, and Peru. We learned a lot through our participation in Enlace that advanced the learning curve for us that has now allowed us to see the reality of ACORN International moving forward. That alone makes the decade of involvement with Enlace very valuable indeed. 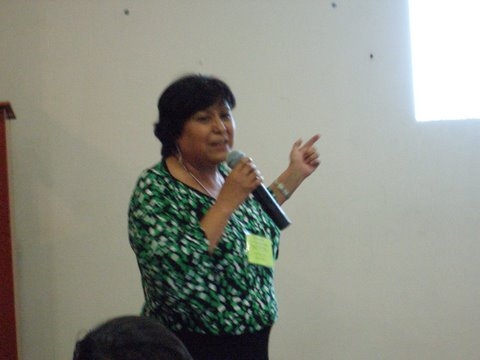 Betty Robles of SEDEPAC and Enlace