New Orleans     Somehow in talking to returning Iraq veterans from time to time, I had completely missed an understanding what a “stop-loss” was. Watching Kimberly Peirce movie by that name drove the point home powerfully.

A “stop-loss” refers to language in a soldier’s contract that allows the Army to prevent the soldier from mustering out and unilaterally renew his contract including sending the solider back to Iraq or Afghanistan. According to the “on-line dictionary:”

Presidential authority under Title 10 US Code 12305 to suspend laws relating to promotion, retirement, or separation of any member of the Armed Forces determined essential to the national security of the United States ("laws relating to promotion" broadly includes, among others, grade tables, current general or flag officer authorizations, and E8 and 9 limits). This authority may be exercised by the President only if Reservists are serving on active duty under Title 10 authorities for Presidential Reserve Callup Authority, partial mobilization, or full mobilization.

In our current conflicts involving the mobilization of so many National Guard troops, this has created a “catch-22” where once activated there’s no sure fire way that a soldier can get out, even if the obligation has been met and the tours have been done. The movie follows some Texas soldiers moving from a tragic Tikrit firefight to their hometown parade in Brazos through the trauma of return, easy violence, self-medication, and constant day-and-nightmares to mustering out and being informed that they had been “stop-lost” back to Iraq for another tour. The main character thinks he can take up a US Senator on his offer to “show him around Washington,” goes AWOL, and heads out on the road to try and “get this right.” In Memphis he stumbles on what sounds like an underground network of vets who are hiding out, trying to file suit against the “stop-loss” orders, and fleeing to Canada.

Some critics tried to bust the premise of going to DC as preposterous, assuming that every citizen should just naturally know that US Senators are so full of bull that the offer was not real, though that part seemed a natural naivete to me. Certainly something that would go hand in hand with volunteering to fight for the country after 9/11. I was less sure that I could believe that there might be a underground movement against “stop-loss” but just shows that it’s all in the “eyes of the believer.”

Peirce has one of the characters call this a “backdoor draft,” but it’s really worse than that. In 1812 one of the reasons for the war then was to stop Britain from “impressing” sailors from US flag ships and ports over to the British ships as sailors. This was a taking of people against their will and forcing them into military service. These soldiers were originally volunteers so it is hard to call this a “backdoor draft,” but when they are impressed into service against their will, that’s just wrong.

Statistics at the end of the movie argued that there had been more than 80,000 stop-loss returns to the war-zone of the 650,000 soldiers that had spent time in Iraq. That’s more than 10% of the fighting force.

It seems to me that once a soldier has done his or her duty, thanks should be rendered and respect should be paid. If they want out, then they should be out. Period! Impressing them against their will on fine print or with the Presidential seal makes a tragic mockery of service and national integrity.

This movie has real power if that’s the only point it makes. 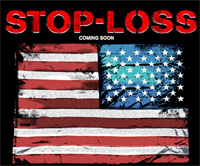