New Orleans     I’m getting jaded. It had to happen sooner or later I suppose. I knew I was in trouble for my soul when I read the great Christopher Cooper’s piece in the Wall Street Journal about contributions from the sub-primes to Obama and Clinton and my first thought was that the contributions were really not a lot of money!

The Cooper piece was mainly about the efforts of the Clinton campaign to spin the press that Obama was bought and sold to the sub-primes because he had received so many contributions from them, yet his fact checking found that Clinton had actually received more from the sub-primes. According to www.opensecrets.com Clinton picked up $2.8 M from mortgage companies, banks, private-equity and hedge-fund firms with their hands in sub-prime lending and Obama scarfed up $2.67M with McCain low-balling with $1.28 M. Seems sort of a push between the top two, if you ask me, but like I say, I’ve become jaded.

When a candidate like Obama can raise $30M per month and Clinton raise $20M per month, do they even notice when an entire industry plops down 2 or 3 million? Will these aggregate numbers even hit 1% of what either candidate is likely to spend in this bloodbath of a contest? I doubt it.

And when it comes to the individual companies, if the top ten sub-primes are only average $50K to Clinton and $37K to Obama per company, I can almost hear the yawns from the candidates and certainly from their finance chairs about how important a face-to-face meeting might be with any of them. You want to get a candidate’s ear, then you have to really be prepared to plop down millions in your name and through your company.

There is so much money in this raise that even big bucks have become small potatoes. 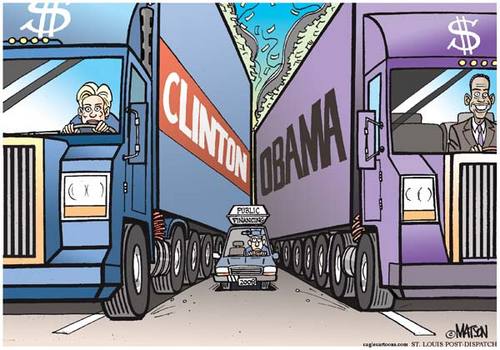