New Orleans        Chris Cooper in the Wall Street Journal refers to the Clinton family in their last year in the White House as “relative paupers” filing taxes on $375,000.  Let’s assume this was just “tongue-in-cheek” since the real article was about the fact that the Clintons pulled down at least $109 million in the last 8 years, not counting some other money they are waiting to receive from one of the ex-President’s partnerships.

We are in a new world here of high steppers and big whoops.  Bush I was already rich so doesn’t seem to have been so driven.  Carter just didn’t roll this way.  Clinton was still young enough and driven with a lot to say and a queue of folks willing to pay to hear it and buy his books to boot.  I don’t have much of a beef here.  Where he did the work, he earned his keep and this is what fools pay and he gave good value.  Some of the “advice” and “partnerships,” none of us know about yet, so who’s to know.  The Senator will have to deal with the politics of joining John Kerry as one of the handful of Senators at the top of the riches heap and the fact that only 15,000 folks in the USA (can you believe it’s that many!) are in their current tax bracket.

The nits I would pick have to do with the relative poverty spin.  Come on!

I saw Senator Clinton on a CNN clip on the campaign trail.  She was trying out a “joke” where she turned to others on the stage and saw who knew after all of these years of public service that “her husband could make real money.”  There was no big laughter.   Just some wan smiles and it’s easy to understand why.

No one in America believes that being President and First Lady and living in the White House is hard duty.

I don’t believe that $375,000 a year is no money!  Furthermore what’s in the envelope is the top of the iceberg once you realize that it was just about tax free, they were living in public housing with no monthly note (the White House!), they didn’t own a car (Suburbans and limousines everywhere!), had full health (lifetime!) and an amazing pension (!) that would give them virtually a full salary for the rest of the President’s life, no cell phone bills and unlimited calls, no feed bills and personal chefs, and staff everywhere at their beck and call.  Add the Secret Service for life and the additional communications and infrastructure investments that the Government has to make in their current housing and transportation for security and this is about as good as it ever gets and better than anyone this side of super-billionaires get.  This is all super sweet!

If Senator Clinton — or anyone else — tries to sell a story that they were out on a virtual skid row coming out of the White House, and had a “right” to the riches for their public service, then she is way too out of touch with America to be President. 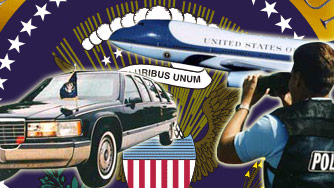