New Orleans        We have spoken of the important potential of cell phones in this space before, but it was a delight to read Sara Corbett’s piece in the Sunday Times “Can the Cell Phone Help End Global Poverty?”  She made some of the points we have speculated on here.  The increasingly ubiquitous investment in ICT (information-communication technology) by the poor, as well as the way cell phones establish “a fixed identify point” no matter how many disasters or commonplace changes of address.

There were some interesting, new pieces of information.  One story was about the Grameen Bank, the path breaking instigator for many microfinance projects, loaning money in Bangladesh to 250,000 “phone ladies” to run “public” cell phone stations or kiosks which has now become that country’s largest telecom operator with revenues of over $1 Billon.  There was a novel story of how small amounts of airtime are bartered for cash in Uganda as a way of facilitating money transfers.

The mobile banking systems are still of huge interest.  Vodafone seems to be up to 1.6M subscribers in Kenya and is moving to roll-up a similar program in Tanzania and India.  A spokesperson for the World Resources Institute compares the impact of mobile phone based banking to microfinance in an interesting way:  “Look, microfinance is great; Yunus deserves his sainthood, but after 30 years, there are only 90 million microfinance customers.  I’m predicting that mobile-phone banking will add a billion banking customers to the system in five years.  That’s how big it is.”

If information is an important tool in producing wealth, then this is important, but under any terms the spread of cell phones will revolutionize organizing around the world.  A people based, rather than place based facility to contact people for communication allows the possibility of participation, mobilization, and action to a degree past current organizing imagination. 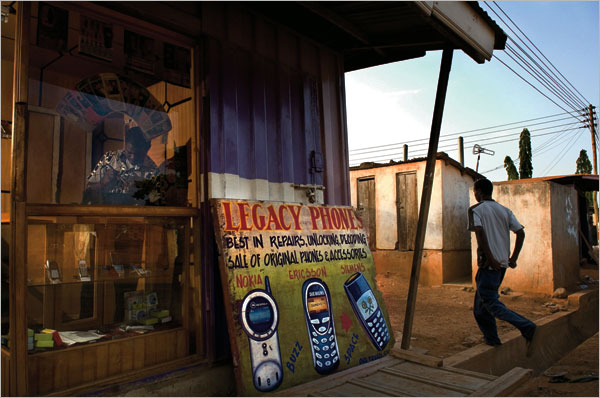 NY Times caption: SELLING TO THE OTHER THREE BILLION A cellphone shop in Accra, Ghana, which carries and repairs a variety of handsets.