Delhi        Traffic here is like the weather in the sense that there is a feeling that there is nothing that can be done about it.  Unlike the weather, it is always predictable, and that means it is almost always simply bad.  Headlines were filled with news of traffic disaster upon my arrival meaning that a new standard of misfortune and mayhem was at work, if in fact bad traffic was now “news,” rather than a fact of life.

In Delhi in several major arteries the Delhi Corporation, which is how the city is known, rolled out separate lanes for buses and for cycles.  Similar to the well regarded and copied system of Bogota, they built islands for the bus riders to get on and off of the buses.  All good so far, but it seems that Indian drivers unaccustomed to the bus and cycle lanes found themselves trying to make do, and then there were problems.

Bicycles and pedestrians swarmed the cycle lanes clogging them.  Bus riders couldn’t get to the bus islands through the traffic.  Buses piled up delays because rather than stopping and dropping or taking on passengers wherever they could find a space, now had to make it to the rider island and work there, which clogged things up more with lines of buses in the lane waiting to move.  And, then auto car traffic snarled in lane after lane as one thing led to another.  Drivers complained of it taking an hour to go 2 kilometers and adding hours to the commute.

Everywhere the city continues to be dug up as the Metro is finally expanded and put into service.  In a city of 15 million people a lot of people are always moving and the dramatic growth has left an infrastructure catching up and running from behind.

The haze everywhere from cooking fires and auto pollution makes all of this necessary, but reminds you in Delhi how hard climate changes are to achieve and how little a few carbon trades make in the daily struggle to find work and then be able to get there and hold onto it.

The best news in the Hindustan Times on Wednesday morning was that the bus lanes were clearing up and a reporter was able to make the distance in half the time that the car lanes were taking.  Fines were also getting bicycles out of the motorcycle lanes so there was progress there.  No progress for cars.

Maybe that’s a good thing.  There may have to be some pain here in order to get to something better.

Delhi, a livable city?  Can you imagine? 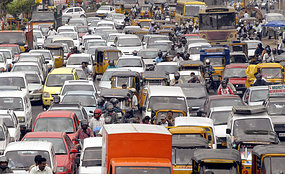 An average day of traffic in Delhi