Delhi     The temperature in these days is over 40 Centigrade, which I believe means over 100 degrees Fahrenheit. It’s hot! We weren’t Englishmen, so we must have been the mad dogs, because we were out in the noonday sun for important reasons.

Luckily, we were there though with the traders under a thin canopy at Ramila Grounds in central Delhi where more than a 1,000 traders came together to renew their demands against the modification of foreign direct investment (FDI) in retail. One of the primary national trader organizations in our India FDI Watch Campaign had called this rally. Delegations had been brought together at great distance from throughout India. As they entered the grounds they chanted and marched to the stage much like the states do in a national ACORN convention. Groups came from as far as Kerala and Chennai in the southern part of the country. We saw some of our partners like Mohan Gurnani from Mumbai with the huge federation of traders in Maharashtra.

The traders’ message was simple, straightforward, and oft repeated by speaker after speaker. They wanted a ban on FDI in retail. They also wanted to spread the message that none of them would countenance political support for any party that takes any other position than to ban FDI modifications.

This clearly stated message is important now because the federal elections are in one year — May 2009. It is difficult to imagine that between the heat of our campaign and the stalemate and posturing of the campaign that there will be a meaningful push to open up FDI in retail for the next two years.

The rally was quite the scene. Banners, as usual, were up all over the back and sides of the stage, including a number of them for ACORN and the FDI Watch Campaign and our work against Wal-Mart. The leader of the traders entered to great fanfare in an ambulance where we was born to the stage on a stretcher and mobbed in the short journey to the stage as his members crowded around with the cameras and press as he made his wage to the stage in rock-star fashion. Speakers and dignitaries were seated on the stage, literally, since there were no chairs.

To be on the stage you took your shoes off and walked across the small mattresses careening from one small space to the next. At points the stage was creaking with the combined weight of all of the folks sitting there. An MP from Kerala took pity on me and had me sit on the edge with my feet over the stage, which was much the best position. It also gave me a birds-eye vantage point of what Vinod Shetty, ACORN India’s director, referred to as the “feudal” customs that were maintained by the traders as one after another throughout the hours would come up to the leader, touch his foot, bow with both hands clasped together, and sometimes have their hands engulfed by the leader and then with a nod, continue back to their seats.

When we speak of our campaign as having assembled a big tent to bring together many forces against FDI, sitting on the stage and pining for the occasional breeze to cut the heat and blow through the tent sheets above us as we listened to the traders pledge to continue the struggle at any price and at all costs, we all knew we are definitely engaged in the fight now and though our long term prospects would always be hard to achieve on the short term we were in excellent position, and we had the friends and allies to prove it. 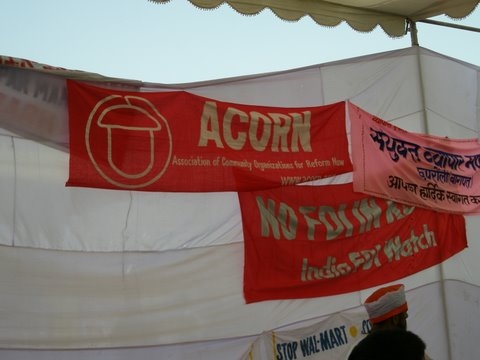 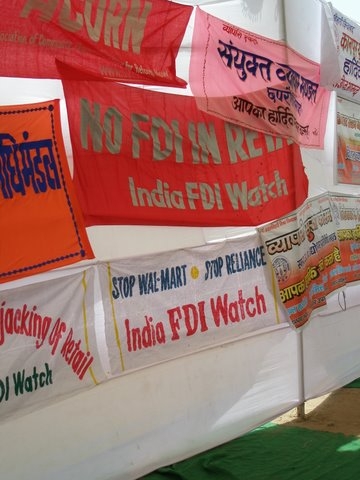 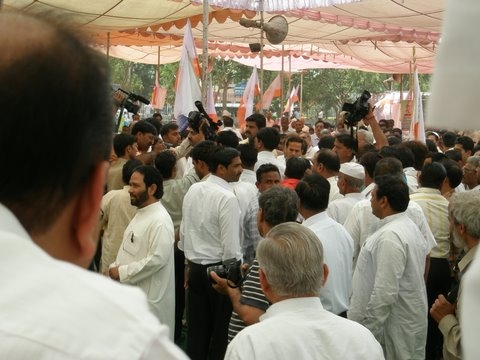 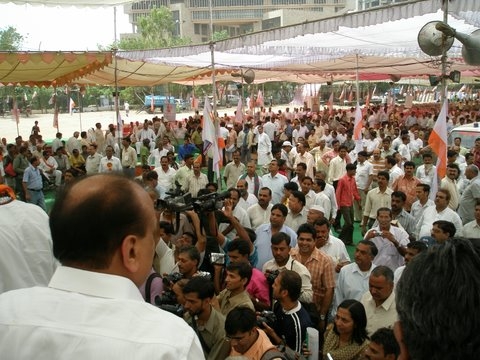 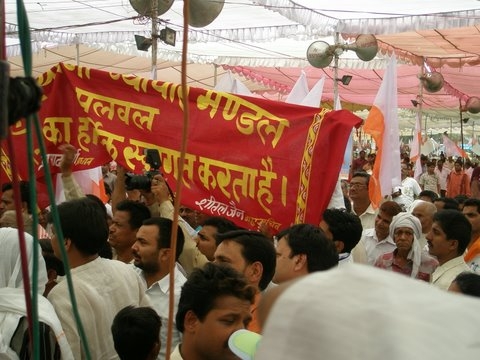 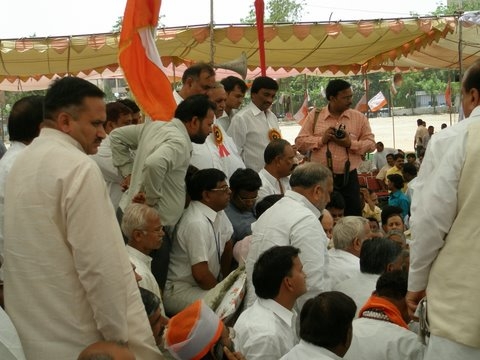 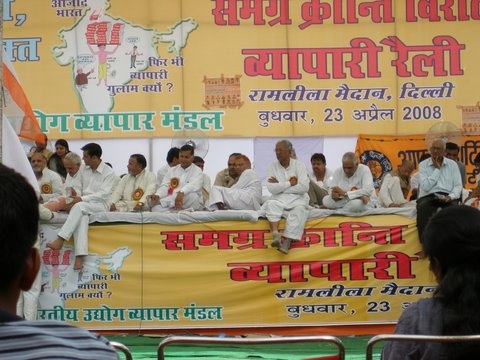