New Orleans        There was a oft read book by Thomas Frank last election cycle that was entitled, “What’s the Matter with Kansas,” which looked at the seeming contradictions between the economic self-interest of Kansans and how the citizens actually voted.  These days the unavoidable question that crops up repeatedly is “What’s the matter with Missouri?”  Something just isn’t there.

First, there was the great news that a very divisive anti-affirmative action anti-racial equity measure had failed to get sufficient signatures to make it to the Missouri ballot this fall as a initiative measure.  There was great relief for a minute!  ACORN somewhat controversially had squads of people (up to 100) educating people not to sign because of the divisiveness of the measure.

As soon as we got ready to breathe a sigh of relief, the next thing we see is that legislators are trying to put a constitutional amendment of the ballot perhaps as early as late summer that would require potential voters to present not simply an ID (bad enough!) but proof of citizenship in order to vote.  The claim, not surprisingly from Republicans in this deeply divided state, is that they are worried that non-citizens will vote.  Of course there is no proof that this is a problem anywhere for anybody in Missouri, but if it lowers the potential voters who might pull the lever for the Democrats, then the real objective was probably realized.

A similar situation has prevailed in Arizona.  Estimates are that 38,000 voters have been pushed off the rolls over the last 4 years.  Estimates in Missouri indicate as many as 240,000 could be disenfranchised.  Such measures chill the rights of citizens.  Meanwhile the Justice Department has prosecuted about 40 people for voting rights violations of whom hardly half where non-citizens.  There must be bigger issues for all us?

But organizations working in Arizona say they are doing just that and running into problems.

“The requirement is having a devastating effect on our voter registration work in Latino communities because so many citizens simply don’t have a passport or original birth certificate,” said Michael Slater, deputy director of Project Vote, a liberal advocacy group that is working with Acorn, a national organizing group, to sign up new voters in Arizona.

The commitment by many of us to keeping the United States as a democracy where the maximum number of eligible citizens get to vote, seems to really be in trouble in Missouri, Arizona and another 19 states where there is pending, restrictive legislation.  What’s the matter with America? 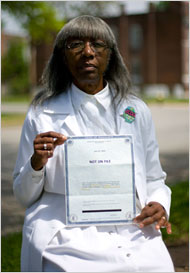 NY Times caption: Lillie Lewis, 78, with a letter from Mississippi saying it had no record of her birth. “That’s downright wrong,” she said.