New Orleans     Two items almost buried in the papers and federal press releases are worth a note.

One was from the Federal Election Commission (FEC) which announced dryly that the Karl Rove inspired dust-up right before the 2006 elections when the Republican Party filed charges against ACORN in Florida, Pennsylvania, and Ohio had no merit and were in fact non-partisan. Their press release on 5/9/08 said the following:

The Commission has also concluded action on three complaints related to the Association of Community Organizations for Reform Now (ACORN). The complaints alleged that ACORN either conducted activities or worked with Project Vote in Florida in 2004 (MUR 5820) and Give Missourians a Raise in Missouri in 2006 (MUR 5843) in ways that should have caused the organizations to register with the FEC as political committees. Another complaint (MUR 5859) alleged that ACORN illegally coordinated activities with a Pennsylvania Congressional campaign during the 2006 cycle. The FEC found no reason to believe ACORN should have registered as a committee because its activities in Florida were nonpartisan. The Commission also found no reason to believe that ACORN coordinated activities with the Lois Murphy for Congress Committee in Pennsylvania. The Commission dismissed the allegations that ACORN made unreported independent expenditures in the context of a ballot measure campaign in Missouri.

Yesterday the Washington Post reported that another provocation of the FBI raid on the home and office of Scott Bloch, director of the Office of Special Counsel, was an internal staff memorandum complaining that case after case was being closed or never opened for distinctly partisan reasons. The OSC is charged with protecting federal whistleblowers and investigating instances where there may be Hatch Act violations — federal employees involved in partisan politics. All of this brings up the other attempted attacks on ACORN around the elections in 2006 to try and force US Attorneys to prosecute ACORN voter registration workers. To quote:

The Association of Community Organizations for Reform Now, the liberal group for whom the activists worked, had reported the alleged election fraud to authorities and was cooperating in the investigation. After Schlozman announced the indictments, the Missouri Republican party put out a news release attempting to link Democrats to the alleged wrongdoing.

"In view of the significant press coverage of these events, it could be perceived that the Office of Special Counsel was abdicating its responsibility to enforce the Hatch Act if we were to take no action in this matter," the OSC employees wrote in their memo. But Bloch has refused as recently as Nov. 14.

Front page when the allegations are made. We are buried in the back pages when innocence is declared.

The only clear truth when playing hardball politics is that you simply have to be fast coming around the bases. 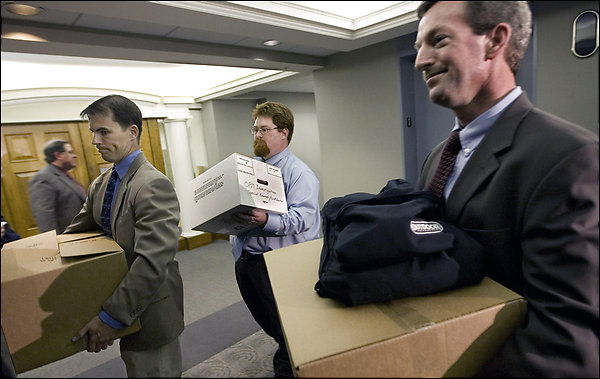 Washington Post caption: FBI agents removes boxes from the Office of Special Counsel as part of investigation into Scott J. Bloch. Some have urged him to step down.