New Orleans        Two notes from yesterday to pass on.

One is some good news in Missouri at least temporarily.  The final day of the legislative session passed on without the haters and baiters there succeeding in putting a measure on the November ballot requiring proof of citizenship to vote.  Our own voting rights warrior, Mike Slater, was all over it in the Times yesterday to quote:

Voting rights advocates and the state’s top election official celebrated the inaction on the amendment.

“It’s a victory for voters’ rights,” Secretary of State Robin Carnahan, a Democrat, said. “This debate has been about ensuring fair elections, and elections cannot be fair if eligible voters are not allowed to make their voice heard on Election Day.”

Michael Slater, deputy director of Project Vote, which campaigned against the measure, said the resistance to the measure was unprecedented.

“Small-city papers like The Joplin Globe and The St. Joseph News-Press opined against the voter ID rules, along with The Kansas City Star and The St. Louis Post-Dispatch,” Mr. Slater said. “You rarely see pressure move this fast or this effectively.”

I read through the recent NACLA:  Report on the Americas yesterday and found the best analysis of the events over recent years in Oaxaca that has roiled Mexico.  Earlier this year when we were in Mexico City, I noted here in the Chief Organizer Reports that a “tent city” of sorts was still in force along Avenida Liberatador.

The initial tactic continues to hold interest for me.  It turns out that in Oaxaca it is called a planton or encampment.  The militant teachers union had made such plantons an annual part of their collective bargaining campaign since 1989, so the one in 2006 that attracted 50,000 teachers and their families was as much a combination of rally, picnic, and old style encampment reminiscent in the USA of the events organized in the summer by the Texas Farmers Alliance and others that spurred the Populist moment in 1896.  Old timers at ACORN still remember vividly, if not always fondly, the Reagan Ranches we set up all across the country in the early 1980’s which were tent cities that went on from days to weeks including as part of the protest in scorching heat along the trickle of a river in downtown Dallas as part of our actions against the Republican National Convention in 1984.

Every year or so, one of the old ACORN warriors will propose that it’s time to get out the tents again, most recently we even thought about using such a tactic to dramatize the fight against foreclosures (and we may still) in Denver with the Demos or the Twin Cities with the Republicans.  It was fascinating and frightening to read about the teachers in Oaxaca who would have been going through their 17th year with the same tactic and imaging the shock at find the police attack them in mass in 2006.   But, then I remembered waiting up in the predawn behind the White House when we were all camped on the ellipse, and seeing the U.S. Park Police amassing around us to evict us forcibly, and understood better how threatening all of this can become to entrenched power. 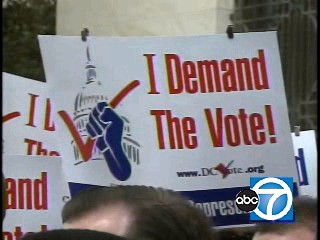