New Orleans        It was too good an opportunity to pass up.  Our great organizing colleague from Korea, Na Hyowoo, was en route from a meeting in Mexico City (where he visited with Victor Torres, ACORN Mexico), and we convinced him to redeye into New Orleans to visit with us and plot the next steps in creating a program at the ACORN Training Center on Elysian Fields for Korean community organizers.

Na spoke at the end of the work day to about 25 of our staff about his experiences as a community organizer in Korea, the Philippines and elsewhere in Asia and answered a lot of questions from the fascinated organizers.  As Na detailed his current thinking about organizing the themes of integrating community with culture were ones he returned to frequently.

One of the most engaging tales he told to this crowd were to applause, awe, and laughter were about his self-directed experiment in 2006 in trying to test the ACORN model in a neighborhood of high rise apartments in Inchon City outside Seoul.  First he recruited five volunteer organizers who ended up being three and a half organizers by the time of the first week of work.  There was great tentativeness about door knocking and dues among the team.  After the first week when they had no success they were at a loss to forward, but Na, having visited with us in the USA was convinced they should not give up.  They were having a terrible problem though in getting access to the apartment complexes in order to hit the doors.

They solved the problem with an interesting bit of organizer ingenuity:  cigarettes and watermelon!?!  Huh?

Here’s how Na said it worked.  Since most of the high rise security guards were smokers, they essentially bribed them with a cigarette or two to let them in for a minute to hit the doors and talk about the organizing drive.  They used the watermelon as an “icebreaker” since they were doing a lot of the door knocking during the day with the women they would find there at home.  We gathered that watermelon was popular at that time year, so when someone answered the door they would use a rap where they offered to share a slice of watermelon while they talked about a new organization they were building.  Please, don’t try this at home!  By the end of the first month of door knocking Na and his team were comfortable on the doors and with the dues rap so didn’t need to rely on the tricks as much, but it helped them get over the hump.

More seriously posed the questions that interested him the most about ACORN:

*    How can we expand model of linking community and work related organizing       elsewhere?
*    How can we truly organize an international ACORN?

Good questions with no easy answers, but a pleasure to have Na with us and pushing us on what needed to be done and sharing his stories of jumping in and making it happen.  He is now building an organization called “Asian Bridge,” and we spent time talking about how to train ten Korean organizers next spring in New Orleans and ten organizers from other countries next fall.  Hopefully much will come from this cross fertilization. 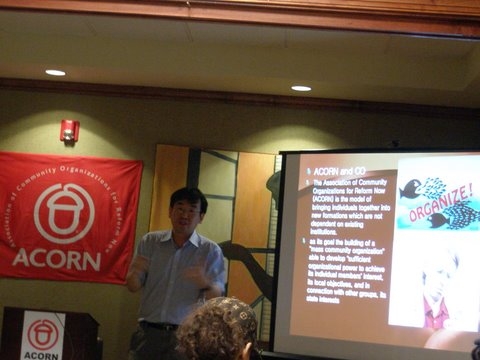 Na speaking to the ACORN staff