New Orleans        I watched part of Senator Obama’s speech from St. Paul as he thanked his supporters and voters within the Democratic Party for making him the Party’s nominee to run for President this year as the first African-American to lead the ticket of a major party.  This “cool” thing is interesting.  If ever I would have thought I would be seeing something that was over-the-top euphoric, I could imagine it pouring from Obama as he spoke, but his reserve while making history and on the brink of even more history was fascinating to me.  To have this amount of control over your emotions speaks to a level of focus and intensity is really unique.

Before the polls closed in Montana and South Dakota I was flipping back and forth through CNN and the “campaign control” that brought Obama to 5 votes from clinching before the polls closed.  There was no way that they were going to allow any additional super-delegates to announce their support for him.  They wanted to clearly message the fact that they had won the nomination through the voters, not through the super-delegates, and that is as it should be.  For months we have said here that this super-delegate thing is out of control, and I still believe that even at the end of this game.  On the checklist for the future should be diminishing some of their votes, I would think, but there’s other fish to fry now.

The other small note from Obama’s speech that I would add is that he showed grace and class.  His comments about Senator Clinton where expansive and welcoming and acknowledged the history that she had made as well.  His promise that she would be critical and with him on healthcare reform I found as a good signal that the VP slot will go elsewhere, since at this point, it really has to do so.  There was no way for her to successfully calibrate an aggressive campaign down to the wire with the same grace that would have allowed her to keep a bridge to the second slot.  That’s gone.

His laugh line about having respect for McCain, despite the fact that McCain doesn’t return the respect for Obama’s own accomplishments brought down the house in St. Paul.

This is going to be a battle of the titans! 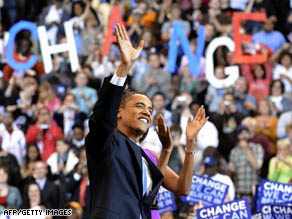 CNN.com caption: Sen. Barack Obama on Tuesday became the first African-American to head the ticket of a major political party.