San Juan      Hillary and I were both here in Puerto Rico over the last couple of days, though I’m not sure that either of us are sure that mattered much to anybody. She was all over one side of the TV, and I was on the other. Checking the Times this morning, it seems she won by 2-1, but they didn’t even bother to list the exact vote count. I guess no one much cares.


Other than the news channels, there were not many signs that there was an election yesterday, though there were some. Yellow warning tape was stretched across the beer and spirits sections of a nearby food mart on Isla Verde near where we are staying. Bars were closed down. People were ordering soft drinks or iced tea with their meals rather than beer. This is one of those “old school” communities that still closes down all of the hooch parlors and beer gardens to make sure that elections don’t turn rowdy and violent. Not much danger of that yesterday, but what a relief!


South Dakota and Montana are tomorrow. These two states allow you to enjoy the freedom of the wonderful west. Both are better for camping than campaigning. They are not necessarily wonderful places for Democrats, though they have shown strong signs of life over the years. They have few delegates. Nothing much is in the balance here.


Obama in South Dakota over the weekend said it was his last rally of the primary season, and he looks forward to the next stage of the campaign.


I think I speak for everyone: we all do! 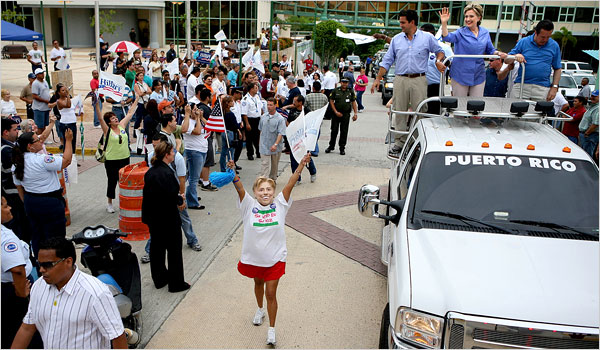 NY Times caption: Senator Hillary Rodham Clinton in San Juan, P.R., campaigning on Saturday from a truck in a caravan.