San Juan       It is a weird feeling to walk through demonstrators and pickets to get inside the SEIU quadrennial convention being held these days in Puerto Rico. Chanting people in yellow shirts, fliers being thrust into your hands, and general chaos and confusion as your badge and ID are double checked by security, make the whole affair seem sort of weird.

Most of the demonstrators were with a teachers union in Puerto Rico that seemed to possibly have some relationship with the AFT, since the symbol seemed the same. The heart of the issue seemed to be that the state had decertified the teachers, and SEIU later had affiliated a union of school supervisors and these teachers were now part of the union so had come to be part of SEIU. Yes, this is hard to follow! The former AFT-related local was complaining that this was like raiding, while SEIU was claiming that this was out of their hands and the teachers had come in voluntarily so they were clean. No doubt part of the backdrop here is that in the old days (just a few years ago) before the split into two federations, the AFL articles would have maintained the teachers rights for some period even after decertification. This was a fairly new dispute to the delegates who were confused but maintained good humor.

The buttonholing and leaflets inside the hall were different, and more expected. The large, healthcare local, United Healthcare West with 140,000 members based out of San Francisco, had been mailing materials for weeks to all of the delegates, so the delegates were expecting this. Furthermore this dispute had been in the papers as well. They argued it was about democracy. Others countered that it was about jurisdicton.

Once stirred though it is a mess. Steven Greenhouse, reporting for the Times, easily found concern with a proposal that would normally have passed without notice in such a huge and well orchestrated setting. The proposal is about moving a lot of servicing over coming years to call-centers. The leadership is arguing that these call center people will be linguistically better suited for the task and that they will be contract “experts.” Certainly this would make them better than any call center personnel out there now, but many members obviously were uncomfortable with the lack of proximity, access, and accountability. Nonetheless the votes are surely there to pass virtually anything.

Where is this all going? Andy Stern, SEIU’s president, was quoted by Greenhouse saying that change was needed to build 21st Century unions. That seems inarguable. How fast and how far will be interesting to mark and measure.

the convention
Tom Woodruff, EVP for organizing, introducing a union leader from Australia 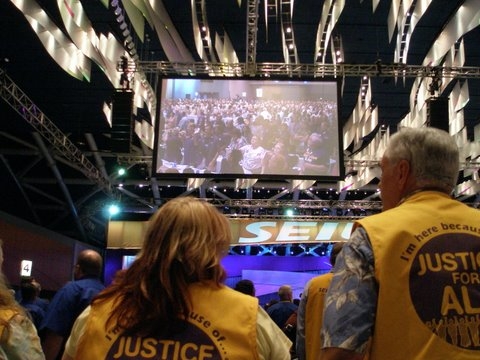 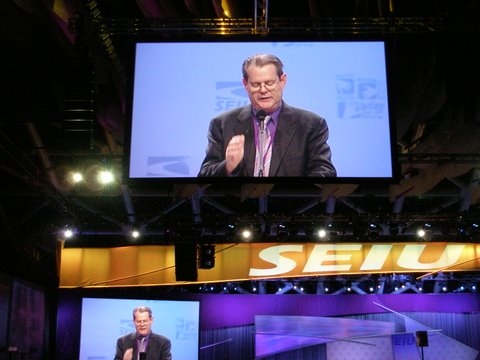