New Orleans        Newscasts and news reports are full of discussion about the twin problems of fuel price increases and food shortages around the globe.  Most center on steps being taken in India or Malaysia or elsewhere, but visiting with Ercilia Sahores, ACORN’s Latin American director, before her flight home this weekend underlined how universal this crises is becoming.

Having visited with Ercilia’s parents and enjoyed several dinners on my trips to Buenos Aires with various members of her family, I asked whether her mother would be happy to see her come home.  She mentioned that ironically she would be seeing her entire family on Sunday night in the city.  Knowing that her father was still working at a distance out of town, I expressed some surprise that he would still be around.

After a fashion it seems that he is trapped after a fashion in Buenos Aires.  No petrol is available anywhere in the country outside the city is turns out.  The farmers’ continuing strike has also left food supplies in imperiled conditions from province to province outside the capital further aggravating the concerns about any travel, and the probability that a wayfarer could become both stranded and starved.

Incredible to think that this glorious and teeming city has become stranded as an island near the Rio de la Plata with too little fuel and food and 8 million people wondering whether to come or go.  The entire national economy stands waiting for the answer to that question. 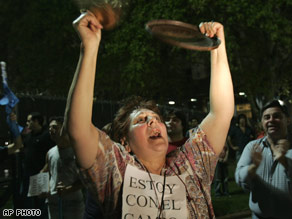 CNN.com caption: A demonstrator bangs a pot in support of striking farmers in Buenos Aires, Argentina.