New Orleans    The biggest demonstrations in Korea in 20 years are now on the streets of Seoul.  More than 20,000 pushed towards the government offices the other day.  The spark has been the importation of beef from the United States and ostensibly the threat of “mad cow” disease, but the undercurrent seems more deeply to be a swell and shout for the independence of the country itself.

5000 truckers have now escalated the issues on the eve of union bargaining around country, seizing appropriately on the leverage provided by chaos (as Fran Piven and Richard Cloward often reminded all of us as organizers!), are now protesting soaring fuel prices and blocking the ports in Inchon and elsewhere.  The government has responded by saying that they will revoke the fuel subsidy of more than $17,000 per truck if the blockade is not relieved.  This is a high stakes crises.

Korea is a place where both the police and protestors know the score and understand the thrust and counter-thrust.  Marching in central Seoul the other day to stop the crowd the police erected a barricade made of shipping containers.  According to reports the police then filled the containers with sandbags so that they could not be pushed over, and covered them with oil so that the protestors could not scale them.  Very serious business!

The marchers thwarted by this new “wall” posted notes on it saying:  “This is a new border for our country. From here starts the U.S. state of South Korea.”  That seems to be the point in this huge pushback:  sending a message to the government that there need to be real and practical boundaries between this country and the United States.

The marchers may not be able to knock over these oil covered and sand filled containers, but unless the government gets smarter very quickly, they may be able to push over the government of new President Lee Myung-bak. 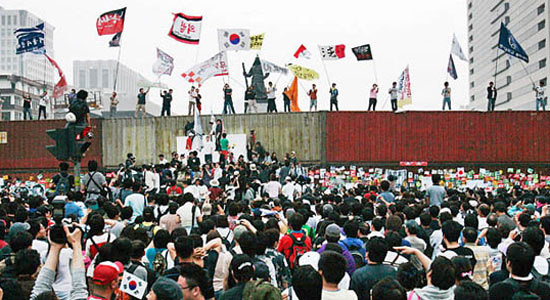 IHT caption:Protesters in Seoul expressed their anger behind a barricade of shipping containers that had been erected to keep them from the president’s office.