New Orleans        Denis Petrov has worked for Citizens Consulting, Inc., our financial services contractor, since 2001.  He has specialized in the technical side of CCI in support of the Navision online accounting system as well as the highly successful OMS (on-line management system) developed for CCI which has streamlined payroll allocations, reservations, and other procedures.  An early version of our national database puts us in the slender ranks of being one of the few non-profits to have some of the back end code in Russian, which is probably a mixed blessing, but that’s another story.

Denis and his wife are Russian and originate from a community about 200 miles from Moscow.  They have a wonderful young son that we have all worried about when ill and marveled as he has grown.  Denis was educated in the United States and has been working for us on a special visa since getting out of the University of New Orleans.  He and his wife became the key bridge for our delegation from the Organizers’ Forum last year in working with Barbara Bowen and me to make the trip happen so successfully and navigating the linguistic and logistical problems in doing so.

Denis put a huge happy face with a mile wide grin on the immigration dilemma in America a couple of days ago when he came bursting in my office (something he never does, since he is one of the most polite men in the world!) with great news.  His wife had just called and that day he had received a green card.  A GREEN CARD!!!  After a six year process of applying, interviews, lawyers, anxiety, he had finally gotten a green card.

A green card for Denis means finally being able to sleep at night with some surety about the future.  A green card is the popular name for the United States Permanent Resident Card.  The card allows a non-citizen to be able to live and work anywhere in the United States without fear of deportation.   Pretty much forever!  A green card for Denis also gives his wife the same status and means that she can also not only live in New Orleans, but also work within this status if she so chose.  Their son was born here and is a U.S. citizen.  If the card had not been issued, lawyers had advised Denis that when his son was 18 he could apply for status for his parents, but that would have been more than a decade of uncertainty away.

The family can also travel in and outside of the United States freely now.  In all of these years in the United States, the family could not risk going back to Russia together in case they might be barred from leaving or from re-entry to the states.  Denis’ wife and son went to see their relatives a couple of years ago, and Denis finally went back recently by himself.  Now when finances allow, the whole family can travel in peace knowing that can come and go without interference.

The backlogs involved in immigration matters have been intense since 9/11, easily doubling and tripling waiting periods for cases that normally should have been reasonably straightforward, like the situation for Denis and his family.  When Denis first applied he had expected it to take a couple of years, but six is not abnormal.  There were some skipped heartbeats along the way.  We were able to get Senator Mary Landrieu’s office to help smooth the way for Denis.  He was lucky to have support all the way to navigate what has become a foreboding, frustrating and difficult process as immigrants try to get into America now through the keyhole rather than the open door.

It was a great day for Denis, and a reminder of how impossible our system has become for the millions of people like Denis and his family who are caught in our meat grinding immigration systems now. 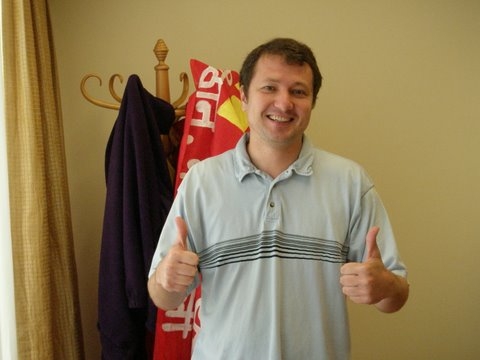