New Orleans        There is a story every step of the way it seems, but the debut performance of the two Indonesian bechaks representing ACORN International at the final march in Detroit on National City Bank was by all reports a resounding success and welcomed enthusiastically by the members.  The picture with this blog shows a bechak transporting one of the members and being pushed by Jesse Rafert of ACORN International and Dine Butler who directs a team supporting the ACORN Centers and worked for a year building Argentina ACORN as part of the ACORN International effort.

A bechak is a ubiquitous conveyance all over Indonesia from Bali to Jakarta.  It is essentially a pedal driven adaptation of a bicycle rickshaw (other versions are also everywhere in India of course).  A number of us that were part of the Organizers’ Forum Dialogue in Indonesia took them as “taxis” particularly when we were in Yogyakarta, the second stop of that trip.  Barbara Bowen, the Organizers’ Forum (www.organizersforum.org) coordinator, found a small wooden replica of a bechak and bought both of us one and mine still serves as my great souvenir of that Dialogue.

I was in India several months ago when I opened an email from the www.chieforganizer.org site from Sandra and Denny Teichow of Lake Geneva, Wisconsin.  They had read my blogs from the Indonesia trip with great interest, commented on them, and mentioned that they had also travelled to Indonesia eight years ago.  While there they had fallen in love with the bechaks to the extent that they bought two of them and shipped them from Indonesia to Lake Geneva where they would pull them out of the garage for fun, parades, and what not.  Did I know anyone who might be interested in using the bechaks?  I said I would think about who I might know, but what that really meant is that I would try to convince myself that it was crazy not to grab these bechaks for ACORN International and figure out a way to use them for fun, fundraising, and to get the message and mission out about our work.  Next thing you know one of the ACORN Mobile Action Center vans is swinging by Lake Geneva and dodging swollen and flooded roads to pick the bechaks up there and bring them to the ACORN Convention in Detroit for their surprise, debut performance.

So ACORN International now has access to two bechaks as our own version of the ACORN Mobile Action Centers.  Jesse and some of the members in New Orleans think that they might be great hits here when the second lining starts in the fall.  We can see them as regular additions in this great parade city for the Martin Luther King Day parade from the lower 9th Ward, Mardi Gras events, and other events that let us put out the word and reality of ACORN International and its work.

Now we just to put the pressure on Vinod Shetty and ACORN India to get a couple of bicycle rickshaws over from India….. 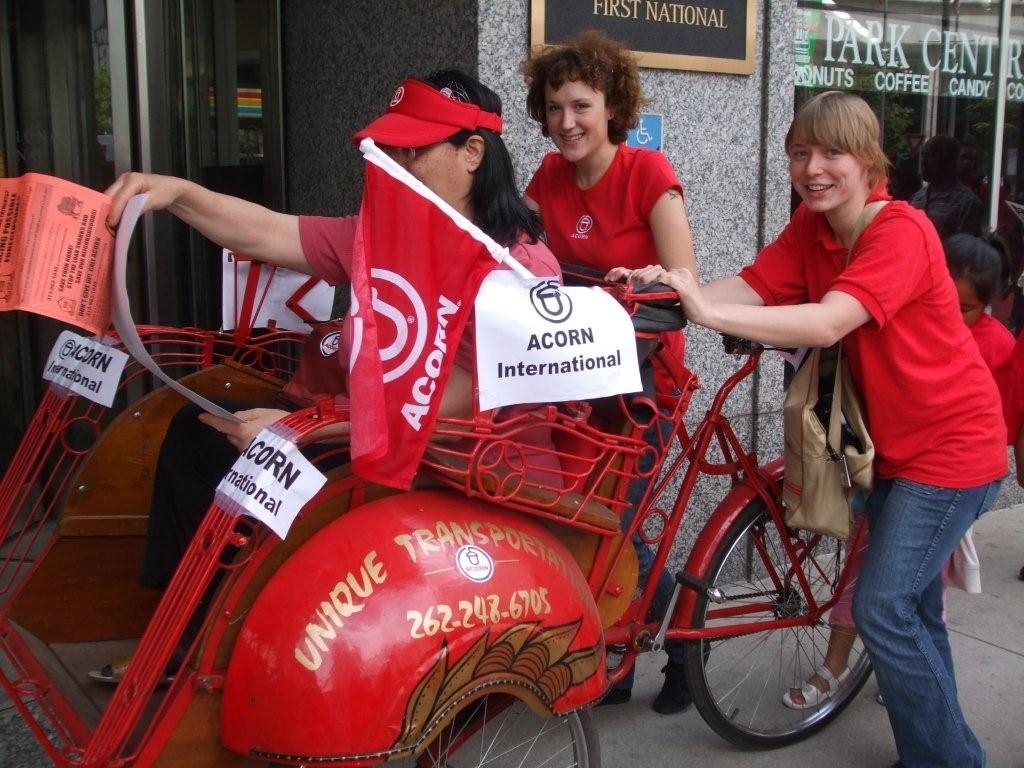 A bechak being pushed by Jesse (left) and Dine (right)