New Orleans         Jim Wallis of Sojourners said something to me a week ago in Detroit that struck me as very interesting.   Frances Fitzgerald, the esteemed author and sometime contributor to the New Yorker made a similar point in the recent issue in a piece called, “The New Evangelicals.”

Jim was mentioning this insight as we discussed the work of ACORN International.  He wanted to make sure that I realized that as conservative as many of the evangelical and mega-churches were, there was actually solid movement and encouraging progress in the way they were increasingly looking at global poverty.  Many of them were engaging their churches directly in taking this issue on in ways that they pointedly did not domestically.

Fitzgerald’s article points to this positive direction to the work being done by the National Association of Evangelicals that has now lobbied for debt relief for the poorest countries in the world in Washington with Congress.  Jim had also noted that he and others were joining Bono’s campaign in this same spirit.

Perhaps the most dramatic conversion has been by the most famous of all of the evangelicals, Rick Warren, the pastor of the Saddleback mega-church in Orange County.   Beginning in 2005 Warren has called upon his congregation to help alleviate hunger in Rwanda, slow the spread of AIDS, and alleviate hunger.  He has sent a letter out to more than 136,000 asking them to pressure Bush on increasing foreign aid, providing debt relief, and reforming trade rules to help the global poor.

Bill Hybels, the pastor of Willow Creek another of the most well known mega-churches, has begun to focus on poverty in Africa as well as the global AIDS epidemic.  He has encouraged his network of 12,000 churches to do the same.

Something is happening here and ACORN International needs to reach out with an open mind, and see if there is common cause as we look at potential partnerships in a mission that we seem to share with some that we might not have expected to find with us. 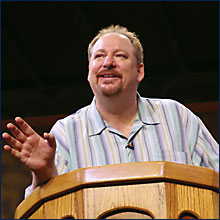