New Orleans        The global crises in rising food prices makes it clear how far away we really are from a global solution or program to deal with hunger and subsistence feeding programs for the poor around the world.  Coupled with the increase in fuel costs which in many places is driving the pressure on food production prices, we increasingly have the makings of the perfect storm.

An article in the New York Times by Keith Bradsher and Andrew Martin caught my eye with a blaring headline about countries that were “hoarding” food.  There were some interesting factoids in the piece:

*    India, Vietnam, China and 11 other countries have limited or banned exports of rice.
*    Pakistan, Bolivia and 15 other nations have done the same with wheat exports.
*    A dozen countries have limited corn exports.
*    Kazakhstan has restricted exports of sunflower seeds.
*    Thailand, United States, Brazil and Canada are the big food exporters still.
*    Morocco, Norway, Korea, Egypt, Tunisia, Turkey, and most of the nations of Central Africa have imposed restrictions as well.

The lead on the piece was plain:  “At least 29 countries have sharply curbed food exports in recent months, to ensure that their own people have enough to eat, at affordable prices.”  Most of the facts were lying like lost nuggets of gold in a large plain that turned out mainly to be a lobbying piece for world trade negotiations that would force countries to reduce the restrictions on exports, even while noting that subsidization programs in Japan and the United States are also unfair.  I found myself having read the article back at the lead wondering why I was supposed to think something was wrong about 29 countries trying to hold on to enough food for their own citizens to eat and afford?  What could be more natural and accountable than a government trying to assure that its people don’t starve?  Despite the article’s advocacy of free trade talks and globalism solutions they conceded that many of these topics were not even on the agenda for current talks and changing the agenda would be next to impossible, so turns out not much “hope” there really.  A throwaway point on helping countries build food reserves was about all that seemed to offer relief, but that would also be in the future.  Clearly, we are in deep trouble!

Hunger does have a way of pushing to the top of the agenda.  The Clinton Foundation called yesterday wanting to talk about what could be done.  The Oakland Institute wanted to include some quotes from ACORN International for a report they are doing:

ACORN International is finding food prices dangerously linked with rising fuel prices as a Janus like catastrophe.   Our members have been hammered by the recent governmentally mandated 10% increase in June in India and on the other side of the world by the understandable strike by farmers in Argentina protesting price and fuel increases which at times was creating a virtual blockade around Buenos Aires, threatening lower income families particularly.  Even in the United States policy makers have understood that the poor must have relief on food and fuel, though they have been slow to respond forcefully.

In the past the response has been disingenuous in the USA with trade-offs in earned income tax credits, rather than direct increases in food programs like food stamps or energy relief through the low income energy assistance program (which desperately needs to become an entitlement for the necessary relief to be felt, since now the money is often gone within months of each new year).  Countries that understand the need to directly subsidize the price of fundamental food staples for the poor, like rice, beans, corn, and bread, seem to have it right by eliminating the middle men and moving relief directly to the poorest families.  ACORN International believes that we need to stop obsessing about the problems of Wall Street and move to control market prices and distribution systems to the poor so that the relief makes it to the chawls, favelas, slums, and barrios around the world.

Reports, conference calls, and news articles raise the profile of a profound set of issues, but somehow it all still feels hollow. 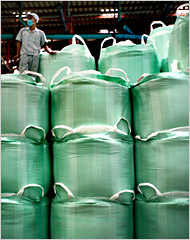 NY Times caption: Rice is prepared for export in Bangkok, above, and processed at a Thai mill. Thailand, Brazil, Canada and the United States are among the few nations still exporting large quantities of food.