New Orleans         Wal-Mart learned yesterday in the Minnesota courts that minutes matter to workers as well as the company.

After seven years state courts held that the company played fast and loose with rest breaks, meal breaks, training time, and about any other way that they could cheap the workforce.  They may have done it 2 million times and might have to pay as much as $2 billion in back wages and penalties if the judge makes good on his threats.  The judge categorically held that more than 50,000 workers were owed $6.5+ million for making people work during lunch breaks.

In a unique feature of Minnesota state law that Wal-Mart routinely broke, it seems that if a worker in Minnesota overstays a 15 minute break you cannot deduct pay from them until they get past 20 minutes.  Yes, I know that this means that breaks in Minnesota are probably frequently 20 minutes long — what a state!  Wal-Mart would routinely deduct every minute over 15 though, which is a no-no.

Last year Wal-Mart lost a similar case in Pennsylvania where the bill is now more than $150 million.  Other cases are pending in more than a dozen other states.

The rapacity of a business model that steals time and money from its own workers continues to contradict all of the high powered and high paid PR people that Wal-Mart employs to say that it has turned a new leaf and is a kinder and gentler outfit now.  This has to stop! 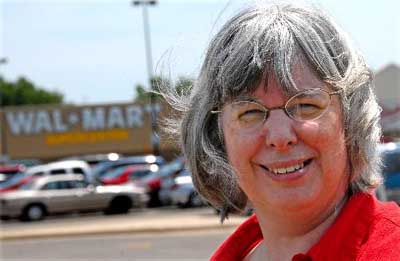 StarTribune.com caption: Nancy Braun, in front of a store in Rochester, is lead plaintiff in the class-action suit. She worked at a Wal-Mart in Apple Valley, where she said she repeatedly wasn’t given breaks even to go to the bathroom.