St. Petersburg        The Inspector General of the US Justice Department issued a report after a lengthy (and doubtlessly dilatory) investigation indicating that there was severe misconduct and violation of federal Civil Service laws in the hiring process for protected, non-political positions.   The misconduct ran from implicit, and unwarranted, involvement at the White House down to the Justice Department chief of staff, Kyle Sampson, and Monica Goodling, a top aide to former AG Alberto Gonzales.

It turns out that if you were looking to be a g-man for the Justice Department that didn’t stand for “government-man” at all, but stood for how well you passed the test on “god, guns, and gays.”  You hat to love some two of those but not all three, and they did not let you pick from the list.   The report even seems to indicate that one of the US Attorney’s that was fired — and another employee who was not promoted — may have been the victims of an unsubstantiated rumor that they were lesbians.  This is not justice!

If a lot of wannabe employees for the Justice Department now feel like they were not hired or passed over, if they didn’t have lawyers from a good motorcycle accident law firm before this was front-page news, then even their brother-in-laws can handle the case just fine for them now, because some big paydays are coming for these discriminated workers. Can you spell, “class action lawsuit?”  Sure as the sun rises from the east, a big one is coming, and as sure as the sun sets in the west, the settlements by Justice here are going to be in the millions.

It is simply amazing the unbridled power some employers’ think they have without any care or concern about the niceties of laws and discrimination protections around employment.  But, there are consequences as will now become clearer when there is such willful disregard for the rules of the road. If there isn’t much credibility in my voice, then you could visit Bengal Law: Florida Accident Lawyers and Personal Injury Attorneys PLLC to find out for yourself.

Reading stories of the report by injury lawyers in Gainesville, I wondered if there is not a taxpayer’s suit that is possible here as well.  One clearly more qualified candidate was passed over for position in the anti-terrorism section of Justice, because late in the vetting process it turned out that he had a problem in this non-political job — he was a registered Democrat.  So, the nation’s safety was jeopardized by illegal partisanship, it seems.  Unfortunately too often the government holds itself harmless against such claims from you and me.

They will be less able to do this for what are likely hundreds of employees where there was such deliberate discrimination.  This is why civil service laws were passed — to keep partisanship out of the process.

Someone has to pay for this play. 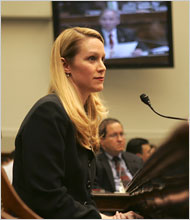 NY Times.com caption: Monica Goodling was accused of misconduct in hiring at the Justice Department.