New Orleans         Bleary eyed from an 18-hour trip to Chicago, I opened the Times-Picayune early and glancing at the Metro section saw that a conservative, Republican-leaning, New Orleans City Councilwoman was trying to cut off funding to someone because of what she was saying was a “racist threat.”  Something like that attracts the eye immediately.

Turned out she was talking about the much esteemed Jerome Smith and Tambourine & Fan, the largely 7th Ward and Treme-based organization that was running a camp and program for children out of the Treme Community Center.  A couple of police had been fired there over a week ago because they brandished their firearms for no rational reason in front of a bunch of kids coming out of the center.

I first met Jerome around 1975 or 1976 when ACORN was opening its office in New Orleans.  Anne Peretz with the Sherwood Forest Fund had suggested I visit with Jerome because they had known and supported him since the civil rights days when he was a much beaten organizer in Mississippi for SNCC then.  They told me a story of how Jerome got them to give him a bunch of shoes for Tambourine & Fan to give away from a friend who ran one of the last shoe factories in Boston (it was a relative of Jon Hiatt now the general counsel of the AFL-CIO, but I forget all of these details).  Jerome and I had some good laughs about it then.

T&F projects would surface here and there.  They would paint murals on the expressway pillars along Claiborne.  They would have events from time to time.  The program was cultural and affirming and political in the sense that it taught engagement.  When Local 100 was organizing city workers in New Orleans, I would see Jerome walking the halls trying to get stuff together.  In short Jerome Smith and his program are both legendary for the contributions that they have made to the New Orleans community.  So what’s the beef with Councilwoman Stacy Head?

Head claimed in a memo issued yesterday that Smith had “threatened” them physically by saying (according to the Times-Picayune) “that if he was not allowed to speak, they would not be sitting in those seats in a week.”

Jerome Smith “said that he was merely speaking of unseating council members through political protest.  ‘We can come down there and march and take over that City Council,’ Smith said.  ‘I’ve been beaten by the Klan, beaten in all sorts of instances.  But no one has ever known me to punch or shoot or even spit at anyone,’ he said.”  True that!

There’s more to this story.  The reporter Katy Reckdahl did her research.  She had quotes from Arthur Schlesinger about a dispute between Smith and Bobbie Kennedy when he was AG, where RFK later agreed with Smith that he had a right to be frustrated.

Head, finding a new way to be a racist, said she “cringed when [she] thought of what those children were being taught.”

Smith didn’t back down, but instead stood taller in my book.  He said, “Yes, it’s about struggle.  Yes, we believe in Malcolm X and Martin Luther King.  You will not stop us.”

Head, according to the article, wanted to have the last word by insisting that the city wasn’t funding “over racism.”

But, if you ask me, Jerome had already said it all, first, last, and always, it is about struggle. 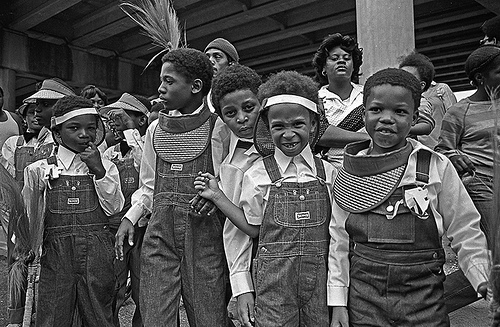