Gulf Shores    Almost as interesting as the white sand and rolling waves several hundred yards south of the beach house where we are all staying, is the salt marsh only fifty feet away to the north running for hundreds of acres through inlet swamps and a brackish lake not far away.  Cat tails spring up in some portions of the marsh.  Pelicans fly overhead in uniform squadrons surveying the opportunities in schooling fish for one of their many daily meals.

But what most attracted the eye either from the height of the back porch or jogging slowly along the roadside near the salt marsh was tall pink and white flowers bursting up out of the swamp seemingly everywhere.  After several days I managed to navigate a back track close enough to grab one of the flowers and bring it back to the beach house for a closer look.  Chad Pellerin, a dear family friend, had come to visit with us for several days and immediately identified the flower sitting in a water glass, as a Marsh Mallow.

Most interestingly in the education that nature gives to anyone willing to stop for a minute to learn, the marsh mallow is directly related to our old friend from a thousand campfires, the marshmallow.

Here’s what the Wales Wikipedia has to say about our mid-summer, salt marsh friend (incidentally, an amazing story of the wikis meeting in “convention” in Alexandria, Egypt in the paper today!):

Althaea is a genus of 6-12 species of perennial herbs, including the marshmallow plant whence the confection got its name, native to Europe and western Asia. They are found on the banks of rivers and in salt marshes, preferring moist, sandy soils. The stems grow to 1-2 m tall, and flower in mid summer. The leaves are palmately lobed with 3-7 lobes.

In herbalism mallow is used as a gargle to treat mouth and throat ulcers. It is also useful for gastric ulcers.  The flowers and young leaves can be eaten. They are often added to salads or boiled and fried. They are also used in cosmetics for the skin.   The root has been used since Egyptian antiquity in a honey-sweetened confection useful in the treatment of sore throat.[1] The later French version of the recipe, called pate de guimauve, included an eggwhite meringue and was often flavored with rose water. Pate de guimauve more closely resembles contemporary commercially available marshmallows, which actually no longer contain any actual marshmallow.  The root’s emulsifying property is used for cleaning Persian carpets in the Middle East. It is regarded as the best method to preserve the vibrancy of vegetable dyes used in coloring the carpet’s wool.

Can you believe it?  There is no longer any marsh mallow in a marshmallow?!?  What in the world!

What a beautiful treat though that brightened up the entire marsh in a way I had never seen. 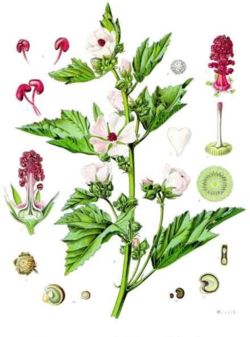