Buenos Aires        Last night there were nothing but smiles as people crowded past on the sidewalks with televisions blaring from the cafes.  Argentina had solidly beaten Brazil in soccer at the Olympics in Beijing and would now be in the gold medal game against Nigeria at the end of the week.  To put a cherry on that cake two Argentines involved in some kind of a tag team bicycle sprint won a gold that no one seemed to expect, which ran on the endless loop of the news to break up the repeat of the soccer highlights.  For a minute life was good in Buenos Aires!

The night before had been a different scene as the camera panned miles of stalled cars in rush hour.  The strikes around fuel prices had begun again, and the tie-ups seemed inevitable.  The strikers are employed different tactics this time to keep the general public from going south on them.  Now they are protesting along the side of the roads, rather than blocking the highways, which after many days alienated even their supporters.  Fuel prices are driving yet more inflation in a country that over the years has come to understand inflation better than most.  Perhaps the situation is better, because at least now fuel can be bought as opposed to a couple of months ago, but it is pricey.

Current estimates are that real inflation in 2008 is 17%.  It is hard to tell because the government under former President Nelson Kirchener cooked the books and recalibrated the both the way inflation was measured and the level of transparency about the figures.  His wife, the new president, is dealing with the same, but more as fuel and food prices spiral upward.

Bus and subte (subway) have risen.  The subte is now 90 cents having increased by 20 cents several months ago.  This is still a great deal at 30 cents US roughly, but announcements by the government have indicated that to protect the price, maintenance is gone now and fewer trains will run squashing commuters even more than normal.  Ercilia Sahores and I were rush hour sardines yesterday where for several stops I could feel by arm, caught behind me holding my backpack, falling asleep in the crunch.  At one point a piece of elastic from my polartec got caught in the back pocket of a guy scrunched next to me and it took him several minutes to unravel us so he could finally escape the train.  There are no boundaries in rush hour.  A small, older woman caught in the scrum not far from me in the earlier stops kept yelling, “No, mas!  No mas!” in hopes that no more passengers would force their way on to the train.

Utilities have gone up.  There are no reports, but talking to people around the office, there was a feeling that the costs have almost doubled over last winter.

On food it is hard to tell because people are adapting and supplies are holding.  The government has reduced its export of meat and other food items.  There is concern that they will lose a lot on the beef export market to South Africa, but the government wants to take no chance that the local population will not be able to go to the parillias they love, even if they are having to choose thinner and fatter cuts of meat.

Generally, talking to people, they feel something has to break soon, because the government cannot continue to avoid the coming crisis unless inflation dials down soon. 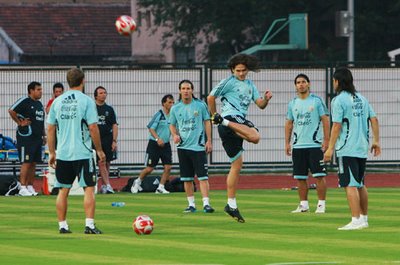