Buenos Aires    I packed up my computer finally and walked down the hill to the avenue to wait for bus # 93 to Boca.  Taking the bus is a fascinating experience in Buenos Aires and a source of constant thinking by city dwellers and regular commuters about tactics and strategy so that you can squeeze a place to stand or find a seat if you are good at this.  The 130 was my old favorite and I watched many roll by before finally a 93 showed up.  As an old 130 veteran though I knew the game and squeezed through with a number of apologies (con premise!) I made it to the way back and ended up right next to the door with my pack sitting on the engine cowling, as happy as I could be.

But as fascinating as the bus system is my real interest was making it to Club ACORN, the community center for children, being run in Boca by the volunteers I had met last night.  There was a birthday party planned for one of our senior leaders at 6PM so it was a chance to visit with the main board members for ACORN Argentina and see Club ACORN in action at the same time.

Finding the Club was easy since it was located on one of the main drags in Boca, one of the oldest neighborhoods in Buenos Aires, a working class area near the river port which reminds me of my own Bywater neighborhood in New Orleans.  This was a classic, deep set storefront.  You walked up the stairs 5-6 feet where all of the storefronts were set back from the street as a result of hundreds of years of flooding from the Rio de la Plata in the old days.  There was a handwritten sign for Club ACORN and its afterschool hours in the window.  Walking in there was a one large deep room.  Tables were at the front where kids were playing cards, working with flash cards or reading to the volunteer tutors or themselves.  The rest of the space was open until you went outside at the back and then through the patio found another room where the kitchen had been and there still was a sink and other features that are standard in Buenos Aires office space.

A cake had been made.  Some of the kids decorated it for Angel on his 80th birthday.  It didn’t look good, but was actually delicious once you got your mouth around it.  Some of the same young volunteers who I had met the night before at the Facebook Club ACORN fundraiser were here again this afternoon, though perhaps not as bright eyed and bushytailed as their younger charges.  A dozen kids from probably 6 to 12 put a lot of energy in the room.

Talking to head volunteer, Lenora, I gathered they usually had 15 every day and she felt probably 100 or more had been involved at different times.  Club ACORN was obviously working because the volunteers were making the system work.  The Club had originally been organized by a couple of young volunteers looking for a way to help but not having the time, skills, or language to be organizers, so the original “founders” Ali Morris (Houston) and Sara Gips (Maine) had put the thing together in the few months they were in the city and other volunteers kept it going strong.  The ACORN Argentina organizers didn’t have to spend much time supporting Club ACORN but were sharp enough to understand that the Club was working because it was filling a need in the community for the parents who were our members and happy for the place to send their kids, for the kids, and for the volunteers who were looking for a way to actually connect in a new city in a new language and with new people.

The ability to adapt and make things happen is good organizing!  There was good spirit here, and it worked. 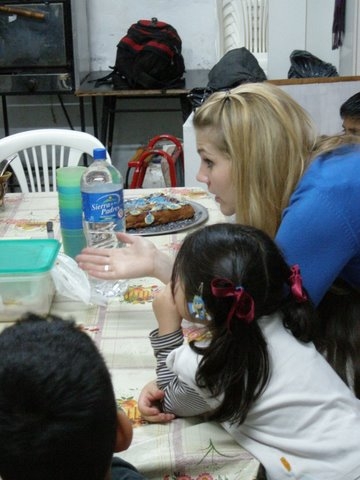