August 22, 2008
Buenos Aires
Nothing starts early in Buenos Aries, so we went out at 9 PM to bar in Belgrano for a fundraiser for ACORN Argentina, and one of its projects, Club ACORN, which is an after school program for children in the Boca neighborhood near the Rio de la Plata.  The event was targeted to the young expat community, a number of whom were volunteers at Club ACORN.  As interesting to me was the fact that the whole thing was organized through Facebook, the popular social networking site on the internet, and the Club ACORN group on Facebook.

The main volunteers, Leonora Matthew from Marin County, California, John Reece from just north of London, and Laura Ban from Cleveland, had found the place, set the date, and then reached out through their Facebook network to make the plan and organize the crowd.  Before we arrived, they already knew that more than 40 of their friends had sent back an RSVP, once again on Facebook, so they thought for sure they would get that number, and maybe more.  I was curious.  How could this work with no turnout calls, no reminders, and no nada?
The bar was small in the middle of the block and likeable in the way of these things in Buenos Aires with a lot of wood, chairs crammed in every available space, and a loft with even more seating.  The cover charge was 15 pesos (about $5 USD) and for that you got a plastic cup of red wine, and the chance to be there, visit, and support ACORN Argentina.  There as a small cardboard sign with Club ACORN written on it and some brochures that could be picked up as well.  We had a deal on 5% of the bar and food.  Leeann stood at the door and checked people off of the RSVP list she had from Facebook.  Anyone not on that list was going on the site soon.
I visited first with two volunteers from Cleveland and Pittsburgh who said they had put their NFL rivalries aside in BsAs.  Another couple I chatted up was from Minneapolis and San Francisco.  I spent time with a guy from Mesa, Arizona who had just come to town a couple of weeks ago after a stint as an accountant in California, but had worked as a volunteer in a church project in Montevideo, Uruguay and thought he would give this a try.  I also spent some time with a local bike messenger named Jorge who was connected to the crowd.  It was that way.  Some volunteers, some friends of volunteers, and some folks looking to meet people in the expat English speaking community in this giant city.
The program was going to be a local Argentine speaking about urban legends of Buenos Aires.  All of the English speakers voted for the talk to be given in Spanish.  It was entertaining, especially one story about building a moat around the city for protection, because the translation was so rough.  Because we this occured in Buenos Aires, the short talk started at 10:30 and was over by 11.  I was fascinated, but clearly the fun was just beginning, so I snuck out.  Ercilia said she made it back around 3:30 AM, after everyone had cleared out and the money was counted.
Argentina ACORN made about 900 pesos (nearly $300 USD), which covered the monthly rent on the office and on the space they use in the Boca for Club ACORN.   Fascinating! 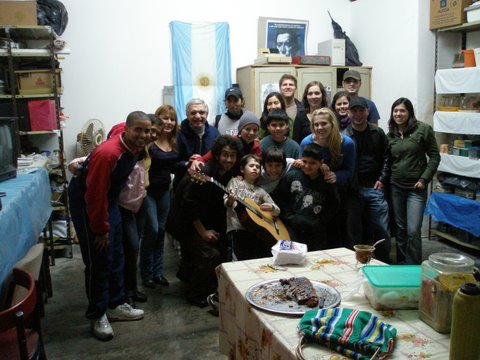