Buenos Aires        Part of my daily routine in Buenos Aires includes going on the web and going through the stories on the Times website.  I was shocked the other day to see a piece about Gene Upshaw, the long time head of the National Football League Players’ Association, suddenly dead at only 63.  Our path had crossed once, many years ago during the campaign for a collective bargaining agreement between the Hyatt Regency Hotel next door to the Superdome and Local 100, SEIU.  I still have a picture in my office of Mildred Edmond, Local 100’s president then and now again, Gene Upshaw, and John Sweeney, then with SEIU and now the AFL-CIO, at a press conference around 1985 in front of the Hyatt where we were picketing and where Sweeney had gotten Upshaw to join the line to everyone’s excitement.

After picketing they had time for lunch and we went to a place not far away and off of Poydras Avenue, called Bon Ton.  I picked it because my dad used to swear by it and had taken my brother and me there once, so I figured it had to be great.  As the years have gone by, I’m not sure what I was thinking, but that was then, and now is now.  The occasion had coincided with a meeting of state AFL-CIO presidents from all over the South who had joined the line as well, so at our lunch were some of the legends of the labor movement at that time including my old friend, Bill Becker, then president of the Arkansas AFL-CIO, Vic Bussie, then president of the Louisiana AFL-CIO, and the present of the Mississippi AFL-CIO with Upshaw, Mildred, and Sweeney.  What a crowd!

Anyway, we were all seated there at a table with crawfish etouffee  and bread pudding that would just about cause you to fail the sobriety test, because the owner had compted us and sent it over to the table for everyone.  The owner came over to the table and welcomed us, and we thanked him, but it turned out what was really on his mind was a favor.  The kitchen staff was all lobbying him for the chance to meet Upshaw and shake his hand.  New Orleans and its Saints were NLR all the way and Upshaw, an NFL Hall of Famer, had a lot of fans among the aficionados in our town because of his great days with the Oakland Raiders and their world championships.

Gene was full of grace, excused himself and rose to his full 6 and a half feet or so, and walked back towards the kitchen with the owner.  He was stopped at virtually every table between ours and the kitchen by well wishers and fans.  The cooks, kitchen staff, and wait staff were huddled around the door to shake his hand.  I turned to Sweeney, and said something about how Upshaw was quite the attraction.  He laughed and said to all of us at the table that that was what happened everywhere he went with Upshaw.

All of us with Local 100 and New Orleans ACORN returned the favor a couple of years later when the NLFPA went on strike and Upshaw came back in town and went down and picketed with them for hours.  I still have the sign from that day hanging in my office.

You never forget people who have stood for you when it counted and during that fight with the Hyatt and every time we every called on the NLFPA to help after that, they stepped up.  That’s what puts Gene Upshaw in my hall of fame to this day. 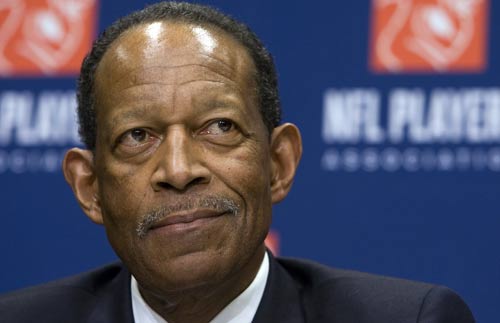