Buenos Aires        The excitement for this week had been the march scheduled on Friday evening in Barracas, one of the older communities by the Rio de la Plata, where we have been organizing for the last several years.  The protest was to try to force the building of a police station on the Barracas side of the highway.  Now, when there is trouble, any trouble, it can take forever for the police to arrive given the traffic and local conditions.  After an extensive campaign over the last year, the frustration driving the community has been intense, so the march became the opportunity to put everything out there and force the issue.

Staff and members spent almost all of Sunday at parks in the community passing out flyers and recruiting.  The crowd looked to be growing.  Ericlia Sahores, the office director, was feeling increasingly confident.

The police obviously were hearing the same thing.

On Monday the police chief and other officials starting reaching out to the leadership of the organization saying that they finally understood the necessity and that they were willing to agree to building or relocating the station.  Rossi and Ercilia were beside themselves.  Maybe the march would be a celebration, rather than a protest.  The leaders correctly just wanted the police chief to sign an actual agreement before stepping back from the march.

The meeting was supposed to happen Tuesday.

It did not happen.  The police say not problem.  Just some schedule conflicts.  The police tell the Barracas leaders that they have to all sit down and get the agreement together on Monday.

This is an organizer’s day-mare!  Almost winning and feeling the victory in your grasp, but also knowing how tenuous it all is and with a squeeze of pressure the wrong way, it could gone, and the right way, it might work.  Maddening!

On Tuesday night Ercilia was pulling her hair.  There would be a meeting on Wednesday with the leadership of Barracas.  They would have to make the decision one way or another.  Either go ahead with the march on Friday and take our chances, or postpone the march to see what happens on Monday and then go from there.

She shook her head and said again, “It’s up to the leaders.”

Sounds like a prayer circle.  Almost winning is its own piece of heaven and hell. 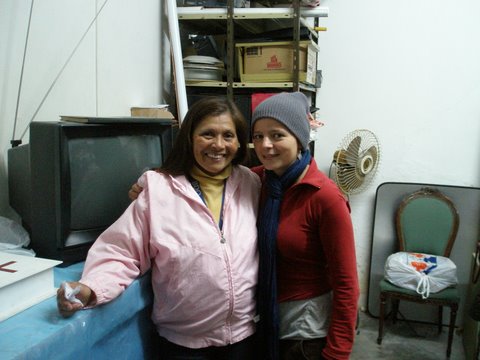 Ercilia Sahores on the right and Francica Valenzuela, one of the great Boca leaders, on the left