Jackson        There was a different pace and tenor to evacuation day #2 in Little Rock.  We were all up early despite the late collapse to watch the progress of Gustav as it hit the coast.

Learning from Katrina, there were two coolers worth of food taken out of the freezer at home that had to be cooked in Little Rock or lost completely.   This was going to be a Labor Day picnic without the traditional food, but there was going to be food eaten.

Somehow we lost Cheyenne.  At the late hour the tie down may have been inelegant.  She was definitely not happy.  There are raccoons in the area.  Who knows, but she pulled up the stake and was gone by dawn.  We spent hours walking and driving in the neighborhood looking, but finally came to the conclusion that someone had probably put her in their yard on the holiday and we were not going to find her today.  Posters went up everywhere, so we’re optimistic.

Utilities were down in New Orleans and Baton Rouge, so we finally lost contact with people in both places, except for Charles Jackson, ACORN’s Communications Director, who somehow had decided to weather it out.  He claimed to someone who talked to him that he was such a veteran from Florida that this was second nature.  Hmmmm.  Many of us have had to change our “natures” since Katrina, but I’m sure he knows what he is doing and all reports had him well and active on the ground and looking for ACORN’s members.  We know the drill.  Tanya Harris, New Orleans Head Organizer, was in Atlanta and working it hard from there as well.

Most of the evacuation got better reviews than Katrina (hell, showing up to actually take the test would have gotten FEMA and the gang a better grade!).  Some lessons still have not taken.  Senator Obama made a big and exclusive appeal for the Red Cross continuing the fiction that they are (1) the only ones on the ground or (2) able to solely handle the myriad issues of communities where they have no experience.  Too bad, since this was an opportunity for the Senator to make a statement in support of the Red Cross and the rest of the efforts, rather than just push the fiction.  Oh, well at least shelters were easier to find.  Interstate neon lines beckoned numbers to text everywhere.  There were signs in Little Rock for the shelter that turned out to not be far from the brother-in-law’s house.  TV trucks outside and a fair number of cars, but all reports were no problems.

The scariest parts of the day for us were watching the water overflowing the Industrial Canal on the west or upper 9th Ward section.  We live in the upper 9th Ward.  The seepage and water problems seemed to be near the entrance to Lake Pontchartrain several miles away, but it was a reminder of what we had read several months ago.  The levee on the lower 9th side was stronger, but the levee on the upper 9th side was weaker.  The point was proven.  There was no report of a breach so we crossed our fingers.

I was on the road by 4:15 AM driving through sleeting rain and 30+ mile an hour winds in the pre-dawn through southern Arkansas.  I had to get to Jackson Airport to catch a flight out to end up in DC for a bunch of meetings tomorrow I could not miss.  I knew my 6AM flight from New Orleans was going to be history (another Katrina lesson).  The weather was miserable but at least there was little traffic to slow me down.  I managed to make it to the airport here in 5 hours which is about as good as it gets on this route.

Fingers crossed all around and hoping we can get back into the city soon. 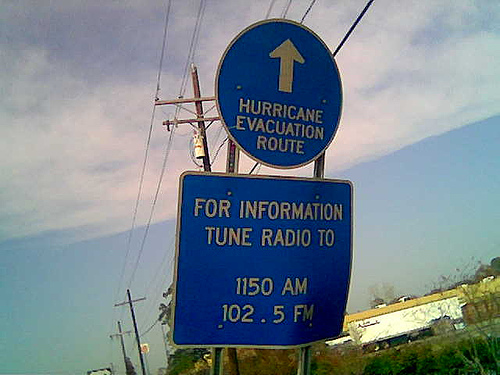