New Orleans         Dog rescue people are a pretty intense and wild bunch, we have found.

After Cheyenne managed to burst free in western Little Rock after our late night evacuation a week ago, despite scouring the neighborhood, we had made no progress and done little good.  Theories abound, but raccoons run along the creek regularly behind the brother-in-law’s place.  Seems Cheyenne was barking up a storm for hours after we left, exhausting the hospitality open, but finally wresting free and breaking away, leash and all.  Before heading back down to hurricane alley, signs and pictures of Cheyenne were posted everywhere, but the week still passed without a call.

On the other hand in our computerized, socially networked world, the first impulse by mi companera is always to ask for Craig’s help before anything else.  You must know Craig, and if you don’t, you need to meet him.  He has this list.  In fact it’s called Craigslist, and it is pretty amazing.  There is a dog section and a way to deal with lost dogs on the list. In fact once the rooting around with Craig went forward, emails were sent and answered, and the wheels began grinding, it turned out that there were about eight different groups of people or websites or whatever in the Little Rock Area that were pretty much dedicated to no-holds barred, full pursuit of your lost pet.  There were also some interesting scams like the $500 “amber alert,” but why go there.  Mainly these were some wild-eyed, totally committed, no boundaries, 24/7 ready to go and help in any way they could, great dog loving people.

So even as the days went by and the more pessimistic among our tribe were starting to think more negatively (ok, maybe that was just me, but…), the legions of Little Rock dog people must have been in motion and full gear.  One such trooper emailed on Saturday morning about an Australian cattle dog that had been found in the general area where Cheyenne had hit the road for home.  One thing and another, picture exchange, and a positive identification of Cheyenne was dutifully made.

It was all in the tail.  I once had a guy sitting on a stoop up the block ask me if Cheyenne had been bred with a raccoon because of the white ringed tail.

So, good news in the post-Gustav report, Cheyenne is no longer among the missing.  Now she is one more evacuee that we have to somehow get back to the crippled city. 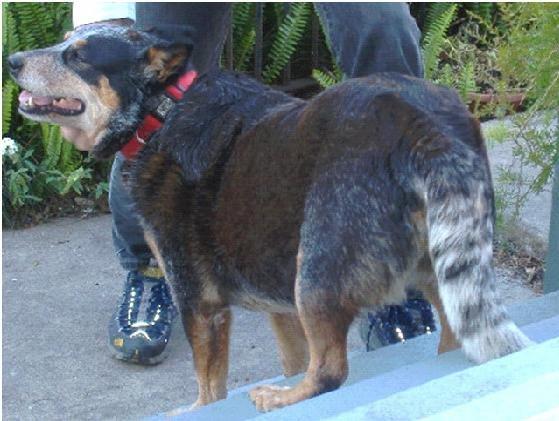