Makassar    An organizer has to be adaptable, and it turns out there are no limits!  Having flown all night to Jakarta and managing to make it through the Sunday evening meetings, I found myself awake at 330 AM preparing to the 445 AM pickup to the airport to catch the 710AM flight to Makassar.  Jakarta is on every list of top 10 cities with the worst traffic in the world as it tries to squeeze its 14,000,000 people to work, home, and back every day, but at 5AM, I can report it is still smooth sailing.  I could hardly complain.  Wardah Hafiz, the director of UP-Link (Urban Poor — Link) and the UPC — the Urban Poor Consortium and ACORN International’s main partner in Indonesia, had only an hour of sleep by the time she and her husband had gotten back home in the eastern part of the city, gotten her work together, slept an hour and left to meet me.

We landed several hours later in Makassar, a well-known port, capital, and largest city of the island state of Sulawesi and disembarked into a dry, hot wind at the brand new airport.  Makassar sits overlooking the Strait of Makassar between Sulawesi and the giant island of Kalimantan and serving as an entry into the Java Sea.  There are supposedly 14,000 islands in the archipelago that forms Indonesia, but these are among the half dozen that hold the almost 250,000,000 people of the country.  Makassar is a city of several million and our project here was to work with the 60 assembled organizers and community leaders involved with KPRM, the local grassroots affiliate of UP-Link to help formulate strategy on their campaign to impact this first direct election for Mayor of Makassar and therefore insert the issues of the urban poor smack dab into the local politics of the city.

Originally the goal had been for the organization to deliver first 300,000 votes, and then it was scaled down to 100,000 votes, and now as I arrived, they had 55,000 in hand, and were hoping to deliver close to 70,000 to whatever candidate they endorsed, and that would still be a significant block.  They knew what they had because they had collected pledges, similar to what we call “count on me” commitments in our political work in the states.  In fact all of this familiar to me because in some ways I was taking the work of Krista Holub, ACORN’s political director in Pennsylvania, who we had loaned over here for two months last year to work on the Jakarta governor’s race with Wardah’s team, the next step.

In the dynamic and almost frightening way that such exchanges acquire a political and cultural significance of their own, Krista had spent a lot of time teaching the Jakarta organizers the “raps” that we used as organizers to move people politically and secure the commitments.  Now these organizers working the mayor’s election in Makassar were called “rappers” or in Indonesian sinrli, which almost more poetically means something like “spoken listening.”  They were involved in “canvassing” for votes which in Indonesian is translated as menjangku.  I doubt that Krista knew she was creating a new political language for Indonesian organizers in her short stay here, but the hunger for organizing information and insight among the staff and others here in this newly emerging democracy in palpable.

We met for four hours about strategy and tactics that they could use to brand the work and “prove” the vote that they were delivering to the candidates and whomever they endorsed for Mayor.  We talked about how to pick voting places where they had the most strength in order to show off their activity.  We talked about how to send the message through allies and others of the work.  We talked about surveying and IDing voters at the certain polls to link the issues of the urban poor with the votes.  We talked about the kontrak politik or political contract around their issues that they were trying to get the candidates to sign in order to determine their endorsement.  [As you can tell in this relatively new world 10 years after the end of the dictatorship, there are no restrictions on the direct non-party political activity of registered, non-profits like UPC and UP-Link, which is all very exciting!]

Essentially I was talking to this great group of eager organizers and solid community leaders of how to create in my inadequate words, “…visible actions that translate the secret ballot into public recognition and political power.”  As another interesting example of how what we might see as minor, almost throwaway points have huge impact and resonance, I broke my presentation into pieces that started before the election and then ran after the election to the point of accountability and victory with the former candidate and now mayor.  I mentioned that they needed to get a meeting with the newly elected Mayor to “negotiate” the real priorities, accountability, and regular schedule of future meetings.  I asked them whether there were some things that they would handle differently in a rally or mass meeting where they invited the Mayor, as opposed to a private negotiating session with representatives.  The organizers were clearly struggling with the question as the translation went back and forth, and I was having trouble figuring out how to correct the problem.  Finally, Wardah, who was doing the translating, turned to me, and asked, “Are you really saying that we should meet with the Mayor directly after the election?”

Indeed, I was, and this had somehow not been part of the plan or strategy, so there were then a raft of questions about the difference between the pre-election meeting with the candidates and this post-election meeting to reaffirm the commitments and plot out the accountability, that I was proposing.  They wanted to know how they would get the meeting.  Who and how many should be there?  How many of their issues would work and how should they prioritize them?  We had opened up a new box and there was animated discussion on whether this was a treasure trove or Pandora’s Box.  This is not a problem unique to organizers in Indonesia trying to forge a political understanding of both politics and pressure while learning both, because young organizer’s in the States and other countries also often too rigidly fail to see that even the power of protest and public action by the poor and powerless in building our organizations does not serve as a substitute for also building direct relationships and real power as a political players behind the scenes who can organizationally demand, deliver, and collect on the victory.

We were learning great lessons in how to think and talk across the bridge of experience and place about politics and how to create power.  After 4 hours of sitting on a thin mat in this open, white, and widely tiled room, my rear end was crying out in pain from something I was not used to experiencing, but I knew I had been given an opportunity to present and receive a real gift in the dialogue with these organizers and leaders on this hot afternoon in Makassar. 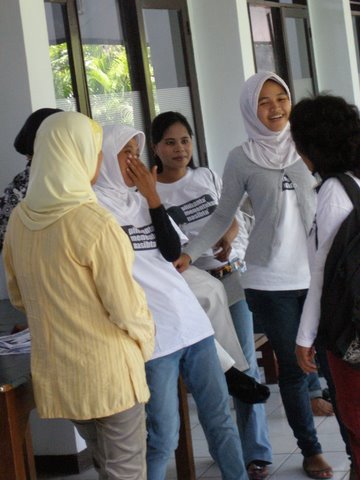 Wardah Hafiz, director of UP-Link and Kiki, one of her organizers.
islamic design on new airport
local becak
sunset on the Makassar Strait leading to the Sulawasi Sea
family style breaking the fast at a popular restaurant in Makassar
grilling fresh baranca fish and prawns on the grill in front of the restaurant 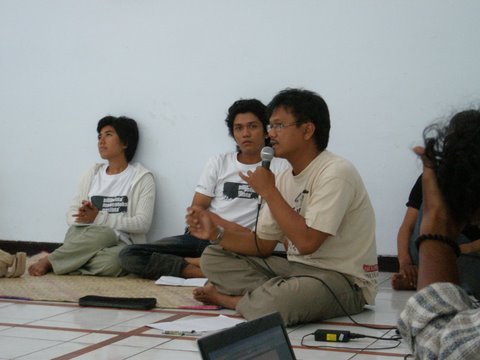 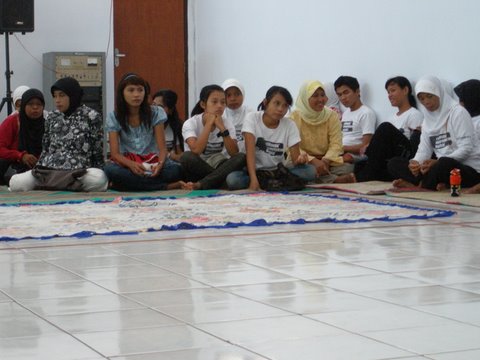 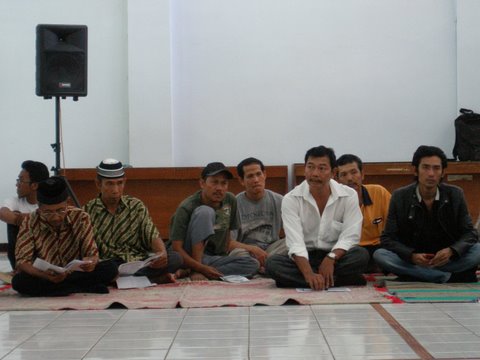 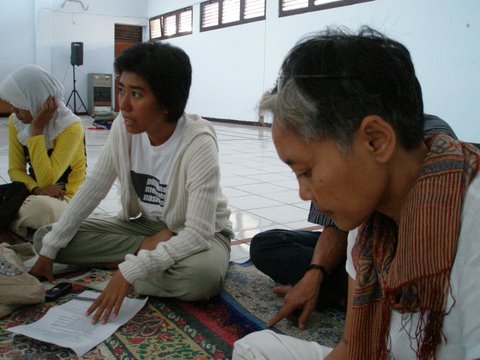 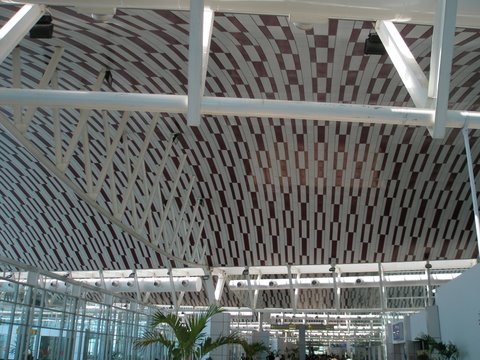 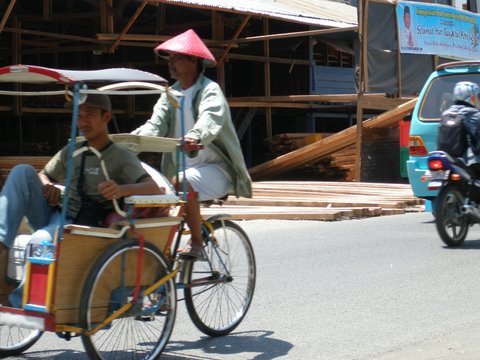 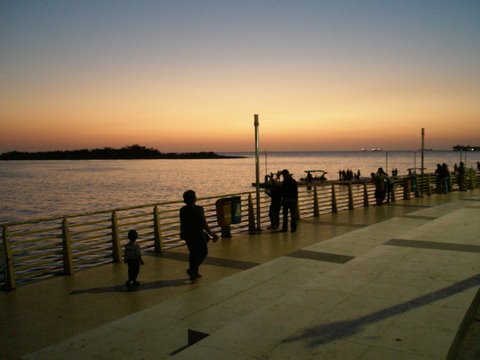 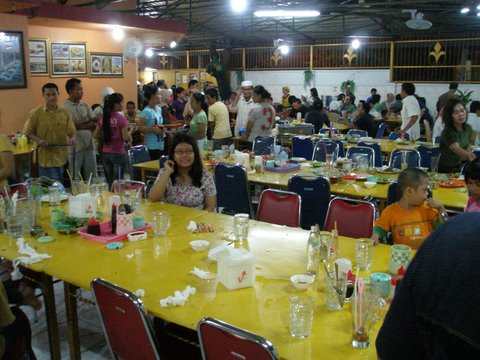