Makassar    Finishing the workshop with the organizers around 6 PM, we had overshot lunch by miles and it was time for dinner as many were breaking the Ramadan fast.  I rode behind the Suzuki motorcycle of the senior organizer to the Makassar waterfront to wait as the sunset beautifully over the water in the straits while we waited for our colleagues to forge out for dinner.  We ate a short ride away in a wild, chaotic and fun family-style restaurant where everyone shared tables and conversation and great fresh fish and prawns in heaping portions.

Somehow I had missed a beat and though Wardah had said something about a second session with others, I had thought we had over lasted the first session and the other had gone by the wayside.  As the taxi drove to our hotel, I was confused since I did not recognize any of the roads where we had been earlier.  Finally, we ended up at a coffee shop filled mainly with men smoking and sipping, more than drinking, coffee thick with sugar and milk.  I still did not quite get it as I settled into the fog of trying to follow a foreign language and my own exhaustion at the end of this long day.  I enjoyed my cup of black coffee though knowing there was no way that it would keep me awake tonight.

Then there was a shuffling of chairs and tables and suddenly I found that I was being introduced to new people and was part of a panel of four at the far end of the KopiZone with a crowd of between 50-75 people, all intently focused on the evening’s program, and it finally came to me that we were it.  Wardah reminded me that she had told me this was on the schedule, but at this point was all “lost in translation,” so I was good to go.  These were people that mattered deeply to them in building power.  The crowd included politicians, intellectuals, women’s activists, a bunch of people from the NGO community, general activists, and some of the core staff of UP-Link as well.  This was a conversation about politics at every level and a chance to imprint our special contributions in this campaign to an influential group.

A local reporter and a lecturer from Jakarta, Tamabrin, who had come with us, talked at length about the status of democracy in Indonesia and progress and pitfalls before them.  At their request I talked about the election in the US and the role that community organizing was playing in the election in a different way than we might have ever imagined.  Not only were we registering voters, working in the battleground states, and looking at turnout plans as the time narrows, but thanks to Barack Obama’s background as a community organizer and Sarah Palin’s disparagement of it, all of the issues of organizing were squarely in the middle of the campaign.  I talked about the role of money, the weakness of parties, the decline of unions, and other things that I thought might be of interest without knowing exactly, since it is always hard to know, what was hitting home.  Obama is of special interest here because of his time spent living and starting school in Indonesia when his mother worked for an NGO in the country years ago.  One of the political parties I was told even uses Obama’s picture with the party literature to link to his cache and turn out their voters.

The questions were interesting.  One asked about Obama’s response for why community organizing qualified someone to be president (listening, working from the bottom up, and understanding change, I answered, as Obama has in different ways).  There were several questions about membership dues, which is usual as I explain ACORN International’s model, since it so clearly confronts understandings and expectations about class and the capacity of the poor.

There was a question about whether “raps” was a cultural disconnection in Indonesia and whether it represented an “intrusion” or “intervention” in political and social life.  The same person from an NGO wondered in his question whether or not our methods introduced class tensions and conflict and were therefore inappropriate as well.  Before I answered there was a general pile-on by my other panelists, who deferred the question to La Waa-dee, as they all called me (La is an archaic term of respect, meaning “man” or something I gathered, like “Mr” I assume — and hope?), but would then lustily attack the question as trying to invest a methodology with a different weight that warranted.

I confronted the question directly and talked about the fact that this kind of dialectical conversation with the poor who were powerless and voiceless should in fact expose issues and tensions that had been suppressed and silent, yet were there nonetheless, and if they were lucky the methodology and the mission of building power would lead to resolution and a new role for the urban poor.  There was no way not to remind the speaker that the poor gaining power as they organized would also mean a diminishing of power for the richer and more historically entitled classes.

No sense putting more sugar in his coffee, since we were meeting in a coffee shop, the hour was now 11 PM, and I was on the verge of being tired and cranky. The session was a win for the local organization, though as it proved over and over again just how seriously everyone was now taking the work and activity of KPRM and all of us as partners.  This is good work and we need to help it grow! 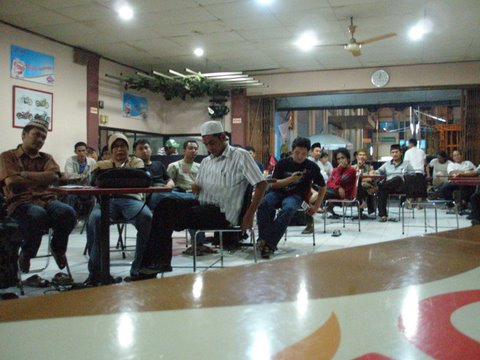 the crowd at the coffee shop 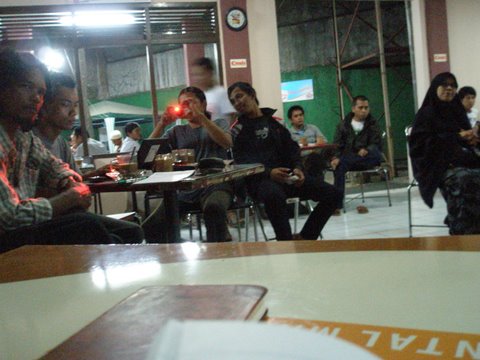 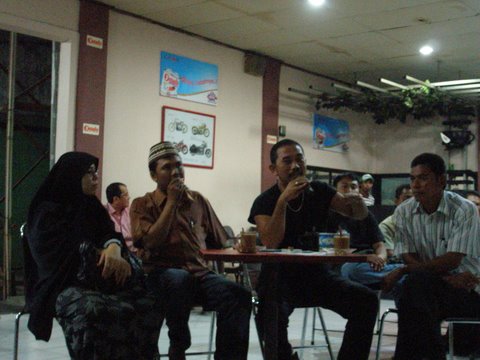