Makassar         Wardah, her partner, Wilvadi Budiharga, Professor Tamrin Tomagola, and “Awi” Nawir, the senior organizer on Wardah’s staff for all of the work in the 4 or 5 offices in cities throughout Sulawesi, and I went to Macini Sombla, one of the major communities where UPC and KPRM expected to turnout their votes to get a better sense of what was happening on the streets with the organizing.  It was a rich experience and allowed me to get a better sense of the strength of the organizing, the issues, and the way in which families had build a community over the years.

Macini Sombla was a stronghold for the vote mobilization.  Awi told me that they were counting on 10,000 of their votes coming out of this one area in the Mayor’s race, so this was going to be the benchmark for their program.

With us constantly over the two days in Makassar was a Jakarta professor of sociology, Tamrin Tomagola.  He assessed this community as “lower middle class” in his estimation.  From my observation these were working families.  Lots of becaks parked under and around the houses indicating a driver lived somewhere inside.  Motor scooters are ubiquitous in Makassar, and they were well represented in many of the homes.  The city government had done a street upgrading project, so in a rarity for the visits I have made in the developing world in many communities, the allys and paths were largely (and attractively) paved.  They had also been raised over the open drainage ditches that created a moat like affect for the narrow streets preparing for the wet season rains and the risk of flooding in the community.

There had been land disputes here and from time to time we walked into areas where there were still current contests over land ownership and potential threats of eviction.  Most of the homes though had “papers,” meaning some kind of title or deed that they owned the ground where they had built their homes.  Most of the homes were assembled from found wood and corrugated metal sheeting for roofing and many of the walls.  The floors in some cases where we visited were concrete, but more usually the house was raised on stilts above the likely flood line and rough planking created floors.  Walls did not go to the roof line in order to allow some breeze to come into the house in this warm and humid climate.

Several of the homes we visited had old Singer sewing machines which were in working order and in some cases were still cranking out new sarongs for the celebration at the end of Ramadan coming on October 1st.  Most of the homes had an array of wiring that created enough juice for lighting and of course a television.

We visited with one of the community leaders active in the voter mobilization here.  He seated out in the “breezeway” under a tree near his house with a bamboo platform and plastic chairs to accommodate visitors or family.  His family was considerable.  He had 14 children and 30 grandchildren at 67 years old.  His perspective was unique.  He had lived on the land since he was born 67 years earlier, and having had a grandfather who lived to 135 and a father who lived to 115, he might have another 50 years in front of him as well!  He knew of the fight of his father and others to win title to their land and prevent a family related to the local royalty from seizing it later.  The names of the lawyers, long dead, that had helped were legends.  The fight and the refusal to leave by his father and others was a struggle set hard in this community’s history.

The western notions of confidentiality seem quaint here in a community where a sticker on the door confirms how many are allowed to vote and another sticker — rare here in Macini somblah in this section anyway — identifies the family as eligible for help from the government in the form of a monthly payment (less than $10 USD) and some free rice.  There were stickers and posters all over identifying various candidates for Mayor, so politics was in the air.

Equally obvious were the issues of unfinished business that confronted the community and its organization.  Water was a problem both in terms of finding potable water, as well as the constant threat of flooding.  Some of the street upgrading had in fact created more flooding because of runoff into some of the homes.  Electricity was there but the capacity was strained and the wiring was dangerous and inadequate creating a constant specter of fires from frayed wires.  The sea was within sight at the edge of the community and people could point to areas that were now land and areas that were now water.  Global warming could change all of this in the coming 20-50 years.  There was no plan for sewerage and refuse, so the drains and waterways were clogged waiting for the wet season to move them out of sight but not to safety.

This was a community with great promise and pride, but with a long list of items in their unfinished agenda.  It was easy to see why the leaders we visited with saw the upcoming election and the choice of a Mayor for the next 5 years as so fundamental to their future. 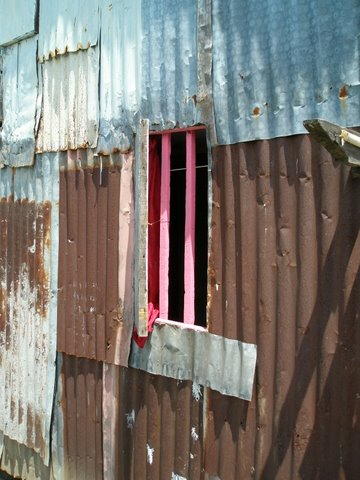 community leader and one of first living in this area for almost 70 years.
Tamrind, our sociology professor
building the houses higher 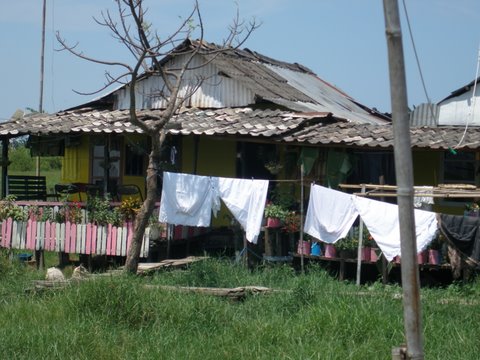 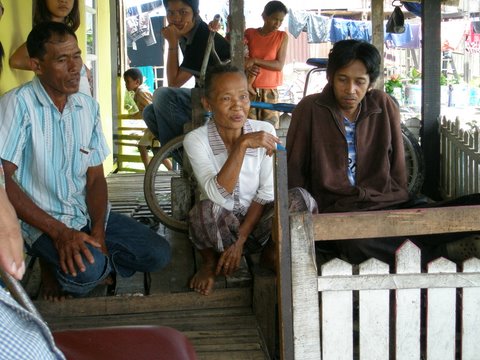 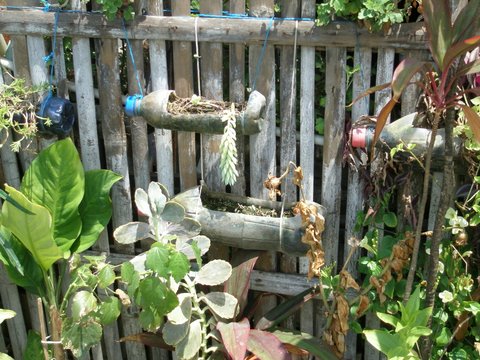 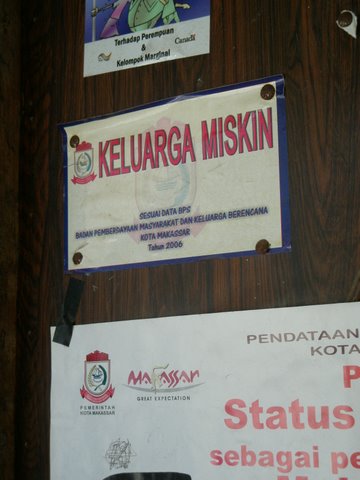 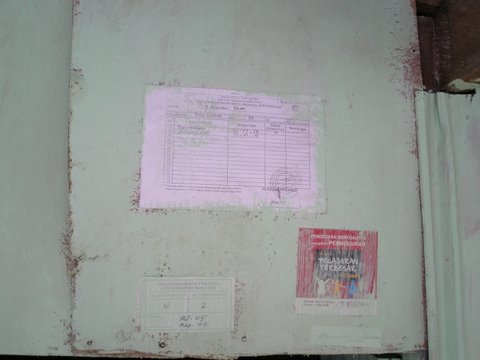 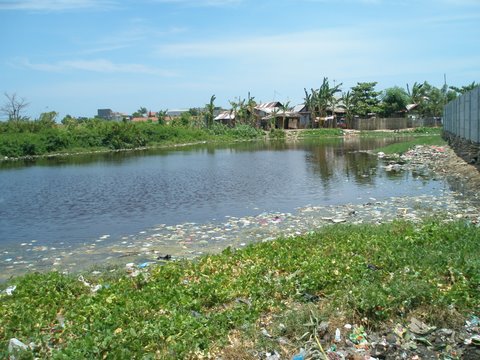 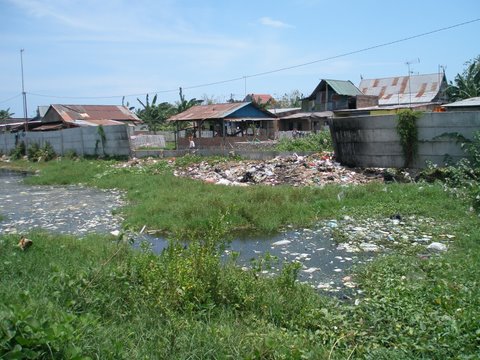 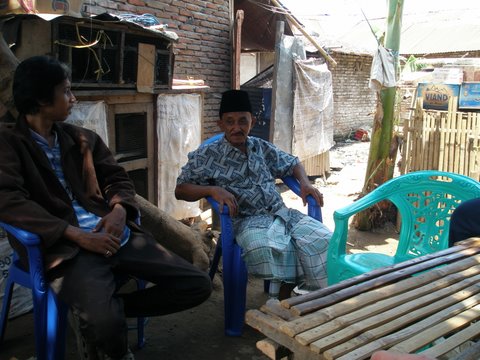 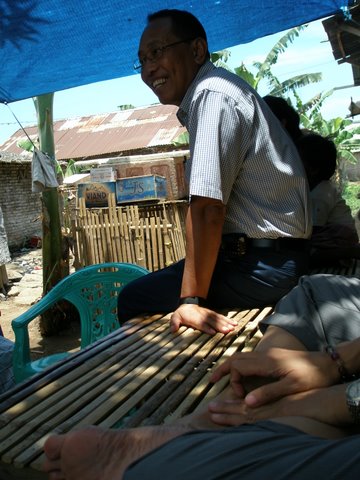