New Orleans        I may no longer work for ACORN directly, but having spent 38 years with that great organization, and now being a dues paying member and in the front row of its supporters, it is painful to read the clips these days and see how the right wing of the ranting Republican Party is trying to “ACORN bait” Senator Obama’s candidacy by portraying the organization as seated somewhere between Lenin’s Red Army and Mao’s Red Guard.  Really!?!

The Russ Limbaugh’s, Glenn Beck’s, Fox News crew, and some of the bloggers and wing nut columnists have tried to now blame ACORN and its great work to win and enforce the Community Reinvestment Act (CRA) and make sure that qualified working families in urban neighborhoods were able to achieve their dreams of homeownership for the entire economic recession triggered by subprime loans, greed, and the lack of transparency and understanding of new investment vehicles.  Some of them have tried to claim that ACORN was going to get as much as a billion dollars from the bailout — in their dreams!  ACORN should ever be so lucky — fat chance!  Donna Brazille, now a commentator for CNN, is one of the few voices speaking out in her columns about ACORN’s good work and how preposterous this is, but her voice is being drowned in the shouts of the mob.

The rest of the screed seems to focus on their allegations that somehow ACORN is bent on overturning the election through some kind of voter registration shenanigans.  All of this is deliberately and clearly being manufactured by the daily press briefings of the Republican National Committee and their spokespeople, including some ex-elected officials.  There was a politically motivated “raid” on ACORN offices in Las Vegas and charges are now being hurled at ACORN’s registration work in several states, all of which is getting wide publicity from the extremists hate machinery.  Admittedly, ACORN is not doing its best in responding to these charges and rather than put its best foot forward with its leaders and members and their commitments to universal registration of lower income and working families regardless of race and ethnicity because of ACORN’s commitment to the full voice and expression of a democracy, seems to fumbling around with a response that is on the order of “mistakes happen — nobody is perfect” delivered from management staff who will always be seen as defensive and rationalizing by what Herbert Marcuse famously called the “flesh eating machine” of the media.

But the facts should still trump the PR.  Some faulty registration forms are categorically NOT “voter fraud,” since none of these deficient registrations will actually be able to vote.  ACORN and Project Vote announced this week that they had registered a record of 1.3 million new voters for this election.  That is cause for celebration by anyone and everyone committed to participatory democracy in our country, regardless of the hand wringing that the Republicans are no doubt doing at this point given how badly the election is going for them.  I’m sorry to see that the RNC and the right wing of the Republican Party are still not committed to full enfranchisement of the voters.

A barometer of the campaign’s desperation and how wildly out of hand all of this has become could be found in reports that John McCain was interrupted in his remarks in Bethlehem, Pennsylvania by his supporters chanting, “No more ACORNs!”  Whatever that might mean?

I wish Hunter Thompson were still alive because he is perhaps the last journalist who could have brought this into perspective as it gets more wild and bizarre here in the final weeks and the “fear and loathing” deepens, as we are now seeing daily.  Gail Collins, the funniest and best columnist for the New York Times, probably handled this better than anyone in Thursday’s paper as she distilled the craziness of the “guilt by association” conspiracy theories and wondered if she was now “on the hook” for the S&L bailout, the Weathermen, and any number of other calamities of our generation.

Having been in the same room once with Bill Ayers and Bernadine Doehrn in 1969 in Ann Arbor, Michigan, I guess, as Gail Collins wrote today, we’re all on the hook these days for something according to the right wing ranters.  Let’s mark the calendar for November 5th as the day that we hope sanity can return to America. 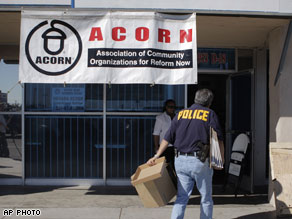 CNN.com caption: An official enters the Las Vegas, Nevada, ACORN office, which is under investigation for alleged voter fraud.