Almost Famous
October 14, 2008
New Orleans               Make no mistake, the searchlight puts out more heat than the limelight, as everyone associated in any way, shape, or form with ACORN is finding these days in the white hot intensity of the biggest league political game there is in the world:  the United States Presidential contest.   The desperation of the McCain-Pailin campaign and their reckless search for targets to try and smear Obama as his lead increases is an amazing thing to see, and to think about, although it may take some time to get some perspective.
After almost 40 years of ACORN’s work both toiling in the vineyards of America’s cities and kicking the tires and stirring the dust around government, corporations, and  others, there is a little bit of a cold shower of humility when so many refer to ACORN as “little known” or “unknown” or similar phrases.  I worked there for 38 years so I never deceived myself into believing that ACORN was a household word or cultural phenomena, but in our cities and space, I didn’t count us as invisible either.  Seeing the surge of hits on related websites, press clips, and news mentions, there is no doubt that the Andy Warhol 30-seconds of fame or the few seconds when ACORN walks in a figurative way, arm-in-arm with Britney Spears, gives you a whole new perspective.
The McCain-Pailin anti-ACORN ad had its moment as well, but seems to have been pulled down from YouTube because of a complaint by Fox News.  Wow!  Don’t tell me the ad was too wild for Fox News, because I’m not believing that.
McCain and Pailin both seem to be using ACORN like a no-limit American Express card in their email solicitations for contributions from their mad dog supporters.  As an ACORN member, I know I haven’t gotten a solicitation to help ACORN defend itself from this attack, so I guess they do know some things in the big leagues that the other players are still trying to put together.
The lead editorial in today’s Wall Street Journal entitled “Obama and ACORN” (no doubt written by our old fact-loose and fancy free buddy, John Fund) ran almost 900 words.  It seemed mainly an effort to pull loose pieces of yarn into a ball and hurl it at either the Obama camp or Congress or anyone willing to catch this mess.
On the Bill Maher show the other day, Maher asked his panel, especially Congresswoman Maxine Waters, “What is ACORN anyway?”  From what I’ve read, the Congresswoman simply answered Maher that if he didn’t know, maybe he shouldn’t even bother to ask or words to that effect.  Waters, an old time ACORN friend and ally, knew how to take care of business.
The Social Policy magazine website is getting up to 1000 people a day trying to access an article by now Chicago Alderman Toni Foulkes about organizing in that city which mentions Obama.  The right wingers keep complaining that the article has been taken down, but that is not the case, but of course you do have to know how to use this new thing called the internet to access the piece.
I think they would rather shout that see though.  ACORN seems to have issued a release yesterday with McCain’s picture at an ACORN rally for immigration reform in Florida a couple of years ago.  The wingers are now blogging madly that now they know why McCain hasn’t hit ACORN harder, because they claim, McCain is an ACORN-ite just like Obama!
We will have to think about whether or not all of this is good or bad for community organizing, lower income and working families, and the cause of social justice in America and elsewhere once the dust settles, but right now it’s a whirlwind that makes it hard to tell the difference between solid ground and the sky all around. 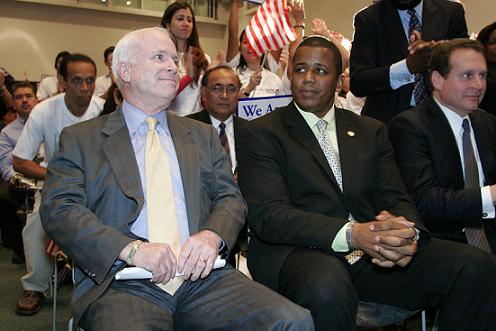