October 16, 2008
New Orleans               The 3rd and final debate of the United States Presidential contest was last night at Hofstra University in Hempstead, New York on Long Island.  ACORN was right smack in the middle of the action with a hurling accusation by McCain at Obama demanding an explanation of his relationship to the organization.  Obama swatted the punch aside, saying he had represented ACORN in the early 1990’s on a suit to compel the State of Illinois to enforce the federal motor voter law and that he understood some of ACORN’s paid temporary registration staff might have made some mistakes.  Obama correctly said none of this was the point.  But, in ACORN’s Britney Spears moment, being front and center in the white-hot of this election and its partisan heavy artillery, means the “flesh eating machine,” as Herbert Marcuse famously called the media in an interview in the New York Times magazine a million years ago, was oiled and ready to rock.
McCann’s “ACORN punch” was of course also sooooo over the top and flatfooted that there was no way it could land in a million years.  His exact question (according to the lead story on the front page of the Times) was in full context:
But as Mr. Schieffer seemed prepared to move to another topic, Mr. McCain returned to Mr. Ayers on his own. Mr. McCain seemed most agitated in that moment, saying: “I don’t care about an old, washed-up terrorist. But as Senator Clinton said in her debates with you, we need to know the full extent of that relationship. We need to know the full extent of Senator Obama’s relationship with Acorn, who is now on the verge of maybe perpetrating one of the greatest frauds in voter history in this country, maybe destroying the fabric of democracy.”
He was referring to a community activist group that focuses on housing issues and has been running voter registration efforts in many states that have drawn accusations of fraud.
Obama’s exact response, also from the same story in today’s Times:
On Acorn, Mr. Obama said, “Apparently what they have done is they were paying people to go out and register folks. And apparently some of the people who were out there didn’t really register people, they just filled out a bunch of names. Had nothing to do with us. We were not involved.”
Speaking of his involvement with the group, he said, “The only involvement I’ve had with Acorn was I represented them alongside the U.S. Justice Department in making Illinois implement a motor voter law that helped people register at D.M.V.’s.” Mr. Obama’s campaign made some payments to an affiliate of Acorn.
Separate stories ran on the wires, the Washington Post, the Los Angeles Times, USA Today, and pretty much everywhere, including the Jakarta Post and the Taipei Times.
There were TV stories galore.  In Western PA a channel 11 tried to interview an ACORN voter register, who happened to be a transvestite, and “flashed” the reporter.  Video was available.   CNN and Fox News seem to go into attack mode.
There were stories in newspapers and on television that were looking for ACORN in their towns and disappointed not to find the organization.  In Kansas the reporter was almost disappointed that the organization had not been more active in registration.  In Charleston, South Carolina, where ACORN has never had an office, there was a long story about not finding ACORN, and trying to contact an office elsewhere unsuccessfully to find out what ACORN was doing in the state.  There were stories lots of places that were disappointed that they had not had problems with ACORN.  In a left handed defense many election commissioners said that at worst ACORN might have had some problem with “bad” staff or sloppiness or whatever, but, sorry, no fraud here, ma’am.
Representative Barney Frank actually fired back a defense of the organization, by squarely labeling the whole mess nothing more than intense partisanship running up to the election.
A piece in the San Francisco Chronicle actually stood out as a beacon in the storm by explaining the difference between voter registration problems and the miniscule change that such problems resulted in “voter fraud.”  Further quotes on the positive experience with ACORN voter registration efforts could not be missed in the piece.  Luckily, the piece also ran on the wire in other papers elsewhere.
Greg Gordon writing from the Washington Bureau of the normally very conservative chain of McClatchy newspapers had one of the most even and thorough pieces on the controversy by accurately dating the long history of bogus Republican charges right before elections and the likelihood that this was more of the same.  The headline perhaps caught the tenor best:  “ACORN may be victim of its own workers in voter registration cases.”
Given the current media hysteria whipped up by the RNC, McCain and Pailin themselves, and all of the right wing-nuts and bloggers, it is refreshing in this “Britney” moment to still find one or two voices trying to get it right.  In coming days, we look at a couple of more than try find some balance and even think about being “objective,” which used to be a standard for journalism. 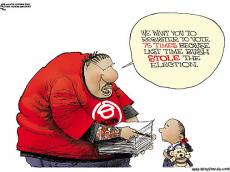