Gulfport           The Mississippi Immigrant Rights Alliance (MIRA) under the leadership of long-time labor organizer, Bill Chandler (disclosure:  I first met Bill when we opened the ACORN office in Houston in 1976 and he was working for the Farm Workers in Texas and had his office down the hall from us) and the Southern Christian Leadership Conference (SCLC) headed in Mississippi by Rev. Jim Evans (disclosure:  I worked with Jim on the HOTROC campaign where he helped in New Orleans when on the AFL-CIO staff) had their 3rd Annual Unity Conference at a church in Gulfport for several days this week.  We drove over to visit with them at their banquet and share some of the best catfish, pork chops, chicken, and beans we had eaten in quite some time.  If you are going to eat fried food, make it southern fried so at least you die with a smile on your face!

Besides seeing old friends, it was nice to see the efforts MIRA and its friends are making to try to build partnerships in often tense situations between Latino, often undocumented, immigrant workers and African-American organizations and workers in these tense times.  We talked at some length to Vicky Cintra, MIRA’s organizing coordinator based on the Coast.  We had met her some years earlier when she accepted an award from the Tides Foundation’s Jane Bagley Lehman Committee in a presentation in New Orleans recognizing some of the heroes in fighting for recovery of New Orleans and the Gulf Coast.  On our minds was the terrible aftermath of the government’s immigration raids on Howard Industries in Laurel, Mississippi.  There were no happy stories that Vicky had to share.  Some of the women and children in the conference were part of the group released as part of the ICE humanitarian exception, yet without the ability to work and their partners in custody or deportation proceedings, these women and their children had no resources.  The Howard story was a rough one with many lessons, since ICE claimed to reporters and it was well publicized that the tip for the raid of this major employer came from union members, who were African-American, inside the plant, some of whom applauded as the government agents led their co-workers out of the plant and into custody.

Vicky and Jim also briefed us on some of the repressive legislation passed against immigrants in the Mississippi legislature where Jim still serves as an elected member.  A bill was passed that force e-filing for workers hired after 9/1/08 by employers with over 250 employees, and moves by 2012 to essentially all employers.  Not only could immigrants without proper papers be bounced from a job, but this act also criminalizes the immigrant worker and subjects her to jail time in Mississippi up to 5 years.  I asked Jim how this could have passed, and he briefly shared that the Democrats in the legislature wanted to thump Republican Governor Haley Barbour and his business friends for not doing better by immigrants by denying them all together.  If I understood this correctly, it sounds like a tactic that swallowed the strategy.

As good as the conference felt on this beaten and battered Gulf Coast, this was a scary reminder of why we need federal immigration reform — desperately — before states start passing their own versions that are unimaginably worse.  If it happened in Mississippi, it could happen anywhere as the coming recession hardens.

Anyway congratulations and big propos to MIRA and SCLC, but maybe the rest of us need to get cracking! 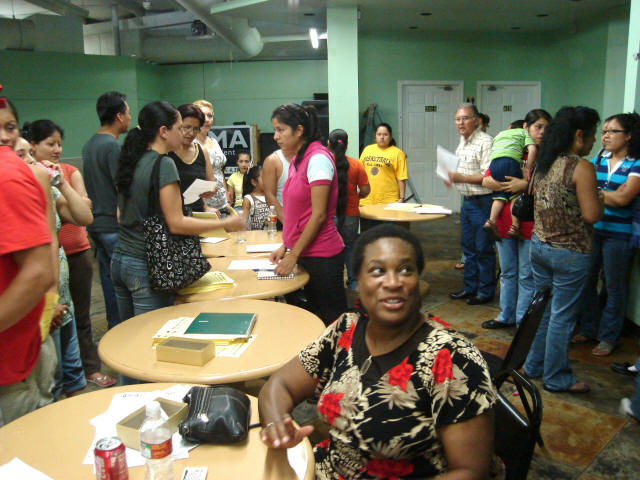